Should I learn Brazilian or European Portuguese? 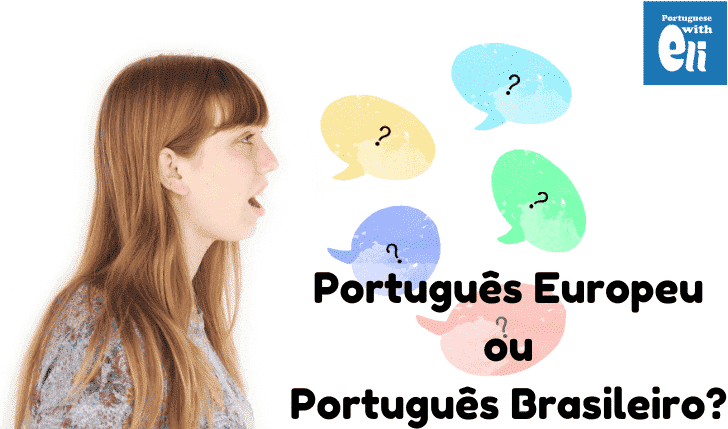 Ellie – my namesake – wants to make better use of her time during the pandemic and decides to take up a new language.

In her case, it’s Portuguese.

She’s learned some Spanish from school and thinks she can use it to her advantage.

(You can, Ellie; take a look at some tips I have for you.)

But now she’s decided on a language, Ellie faces the conundrum:

Should I learn Brazilian or European Portuguese?

First, considering your… ehm… background, it seems you don’t have a strong reason to learn Portuguese in the first place.

If that’s the case, then let’s run the numbers.

Mathematically, Brazilian Portuguese is going to be much more worthwhile.

There are roughly 250 million native speakers in the world. Considering that Brazil has a population of around 210 million, chances are you’ll stumble upon 4 Brazilians before meeting a speaker of Portuguese from another Portuguese-speaking country.

And because you speak some Spanish, Brazilian Portuguese sounds closer (but not too much; don’t make that mistake).

Also, the media is mostly in Brazilian Portuguese. You’ll find a lot more websites in that language, and you’ll see much more about Brazil.

Even Duolingo is biased — the version of the language you’ll learn from it is Brazilian.

But what if I want to learn European Portuguese?

Well, in that case, let me get some things out of the way.

You can also learn Portuguese from Mozambique, Cabo Verde, Angola… and other countries and territories where Portuguese is an official language.

Then you want to learn that specific language spoken in Portugal only, right?

In this teacher’s humble opinion, if you’re going to adopt a textbook, you’ll have a much easier time with European Portuguese.

(The Brazilian test, CELPE-Bras, assesses your level and gives an approximation. And while necessary in Brazil, internationally this certificate is worth a condescending smile in real-world terms. More on that here.)

But other than that, you’ll have everything running against you.

But their YouTubers are entertaining.

But what if I am going to work in Portugal?

Then learn European Portuguese, by all means.

If you want to go the “easy” route and get your Brazilian Portuguese up to speed and “European-zify” it, forget it.

Your listening comprehension will be horrible and most of the time they’ll speak and you’ll not get a word.

And given that you’ll need it for work — better do it right the first time.

But that’s considering you don’t speak Spanish or other romance languages fluently (or as a native one).

In that case, just forget what I said.

One of my best students is from Italy and speaks Portuguese with a slight European accent, but his phrases are all Brazilian.

And please, I’m not saying it’s impossible to learn another variant once you learn one.

This teacher succeeded at making her Portuguese become Brazilian — some words are still pronounced with a minimally European accent, but she sounds clear.

But it involves hard work and isn’t easily attained.

In that case, it’s Brazilian Portuguese.

Although I don’t think you need Portuguese for that kind of tourism — the tourism workers speak English, you know? — learning some won’t hurt.

If you want to enjoy music and read literature, get to know the history, or listen to podcasts, then my variant is the language you need.

Okay. It’s Brazilian Portuguese. Where should I begin, then?

Duolingo isn’t perfect, but it’s a good start. And these phrases will give you something to work with.

You can then take a look at some of these resources to go to the next level.

And if you need personalized and customized help, get in touch. 🙂

And leave in the comments below — which one do you pick? Do you recommend any resources? And why did you choose the one you chose?