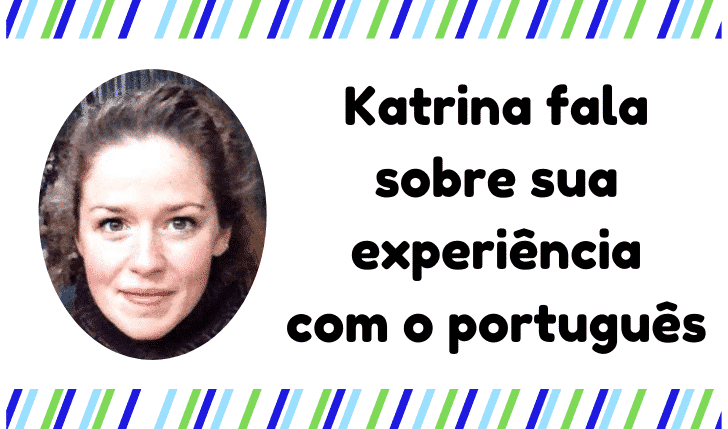 Cambridge-based teacher Katrina has started learning Portuguese after visiting Portugal. “I went to visit a family friend who lived there, and I loved everything about that place.”

Later, she went to the Azores to teach English as a second language. Once again, she had a wonderful experience. These positive experiences led her to learn more Portuguese.

But continuing to learn Portuguese wasn’t easy at the time for her. “[…] after that [going to the Azores] I didn’t have many opportunities to speak it, with the responsibilities and all. But I never forgot my experiences in Portugal.”

And while the pandemics brought hardships for many — Katrina included — she decided to use this time to take upon learning Portuguese once again.

(And, if you let me add, a very good hobby to take up during this time.)

When asked if she has a secret to keep apart three romance languages — Spanish, French, and Portuguese — in her mind, she tells: “I make a lot of progress just by imitating people. I have a [model] Portuguese speaker in my mind and I focus on this person when I speak.”

Switching between languages may be hard throughout the day, but the languages help her. Katrina feels the languages have a different personality, something scientists have talked about in the past.

And if you never heard of that theory, some researchers have looked into the matter. They have concluded that the change in personality comes about for a different reason. It’s not based on the language per se but rather because of their new environment and people they’re talking with.

All in all, this “change” does help not only Katrina but many people keep languages apart in their minds.

“[Mixing languages] sometimes isn’t a bad thing,” Katrina goes on. She believes that when teaching, it’s a good thing that our students see that we, teachers, also mix languages and that languages are interconnected.

“But I keep them apart when I’m teaching, grammar-wise.”

Katrina also dealt with the topic of perfectionism — a plague that robs most language learners of their dreams to speak with confidence.

“[Perfectionism] was something that limited me a lot in the past,” she says. “Life isn’t like that, nobody is perfect.”

Katrina changed her mind about being a perfectionist slowly, but now she can live with being imperfect. In good Portuguese, she says “não ligo [para isso]” (I don’t care [about it]).

Speaking languages is one of my hobbies, but…

While studying languages and speaking with people is a great hobby, Katrina also has other hobbies. One of them is “fazer trilha”, or hiking.

“It’s good to be outdoors in nature.”

And she’s right. A relaxed mind and a healthy body work together toward speaking and using Portuguese – and other languages – more easily.

But hiking doesn’t only help Katrina speak foreign languages. This closeness with nature has influenced Katrina in other positive ways.

She mentions she is abreast of the important environmental challenges we have in the world. So much so that she did volunteer work in Nicaragua in a project about saneamento (sanitation) and desmatamento (deforestation).

“It’s something I’d like to do more of in the future. I’d like to visit the Amazon, for instance.”

But even though Katrina hasn’t been to Brazil (yet), she integrates environmental matters into her work. “My students probably think I’m crazy [because I talk a lot about it], but I want them to have this message clear [in their mind]. They’re the future, they’ll have to deal with these matters in the future using communication between people from different countries and in different languages.”

And that’s a great, great thing to do! As a teacher, I’m glad to see a “colega de profissão” doing this kind of work with her students.

People think teachers can’t or shouldn’t do it, but hey, we can 😊

Katrina has lots of good takeaways in this interview.

And you can listen to the entire interview in Portuguese in the player below.

And an important note: Katrina wants to thank Marina, from Brasília.

And Katrina has been featured in this interview for one reason: she reads Portuguese every single day with our daily Portuguese mail.

And if you want to know how to use the verbs while reading Portuguese and speaking it with more confidence, click here.