Portuguese Mistakes You Make… And How to Avoid Them 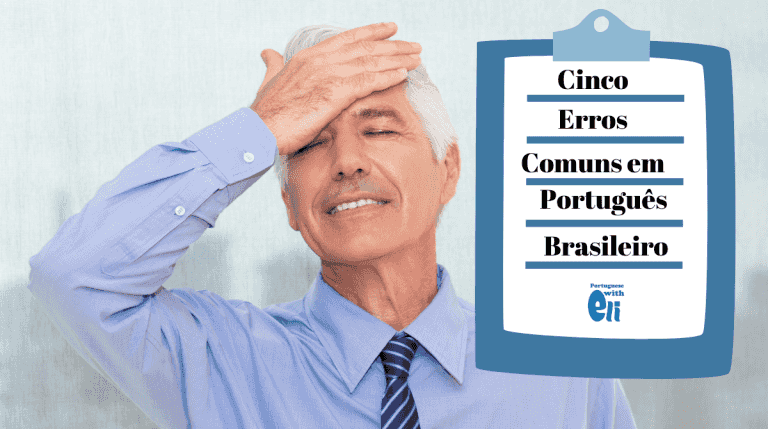 But you shouldn’t be overly concerned about that. Just about every learner goes through these phases:

First, they want to slap their forehead as a signal of frustration. That’s what Brazilians do. Then, they notice that they keep making the same mistakes over and over again. And finally, they overcome those mistakes. Embracing them is the solution.

But how long is that going to take you to overcome these Portuguese mistakes?

If you don’t know what blunders you keep making, perhaps one or two years.

If you do know what mistakes you keep making, you can take some shortcuts and overcome them in about 2 to 3 months.

And that’s considering that you have only one hour every week to study Portuguese. If you can study longer — have more lessons, hit the books more often, watch more videos — then you probably can overcome them in one month… Tops.

I don’t want to waste your time and I’m not that smart to keep you here for more than ten minutes. So, let’s take a look at the most common Portuguese mistakes that learners make when beginning — or even at the intermediate level.

#1 Using Gerund Instead of Infinitive

As an English speaker, you probably use the gerund a lot.

If you need a refresher on what the gerund is, it’s a little -ING that you attach to the end of the verb. For example, “you’ll get nothing by doing this.”

And for a more detailed discussion on the gerund, follow this link.

Well, now that you are a Portuguese speaker, you don’t want to rely on the gerund a lot in those situations.

We use gerund mostly when we use the progressive tenses. Using the gerund as an object, as in the sentence above, or as a subject isn’t that common in Portuguese.

Let’s take a look at some examples.

Now that you know this is a common mistake, pay attention to the weight you speak when you’re talking with friends. Whenever you feel that you are just translating from English into Portuguese, you can correct your course and go on the right path once again.

And as an added practice, I suggest you pay attention to the phrases your friends use when they speak Portuguese. You can pick up a lot and you can provide your mind with enough proof and evidence that the gerund isn’t as common Portuguese as it is in English.

#2 Using “Por” Instead Of “Para” And Vice-Versa

This is a tough one.

Even after having learned the language for twenty, thirty years, prepositions will always be a problem. You don’t need to go any further than your ESL friend. In my case, up to this day I have a problem when I use “to” and “for”. In Portuguese, they seem so easy… But in English they are such a headache.

That’s why I prepared an in-depth article about using “por” and “para” in Portuguese.

But let’s take a look at some examples:

#3 Using “Para” With The Infinitive.

Some people believe that speaking Portuguese is just translating English from your mind and uttering words in Portuguese. Well, there’s some truth to it when you are at the beginning stage of your Portuguese journey. But once you reach more advanced levels, translation should be something of the past.

And this mistake comes with translation. Like, a lot of times you might get nervous or frustrated because you’ve made some mistake that has been pointed out and then you rely on translations to speak Portuguese. You don’t need to do that.

In English, you might say “I want to speak Portuguese with you.” The vernacular Portuguese for that is “quero falar português com você.” As you could see, the little “to” in between the two verbs didn’t translate into Portuguese.

But some people keep on making that mistake. Now you don’t need to.

And here are some more examples for you, this time using a preposition:

#4 Not Using Subjunctive in Portuguese When It’s Necessary

Ten out of ten students I have hate the subjunctive (personal experience). And yet, the subjunctive is what lets you express the nuances of Portuguese with such a precision that you don’t need to explain yourself.

So, you should be using the subjunctive after some verbs — verbs that express a wish, desire, command, and supposition — and after many conjunctions.

Luckily, I have prepared some extensive guides to help you understand how to use the future subjunctive in Portuguese and to identify some triggers of the subjunctive.

All in all, the examples below illustrate well what I mean about some verbs and conjunctions:

#5 Not Using the Preposition With Its Verb.

This tends to be more insidious because many so-called teachers and language apps failed to make it clear that some verbs pair up with prepositions.

This happens even in English. Take a verb like “compensate for something”. I know that my English-speaking friends would say it’s too formal and they would offer me the variant “make up for something” instead.

And let me ask you a question: why do you use “up for” with the verb “make”?

You don’t really need to answer. It’s an arbitrary collocation, and many languages have them. I can’t say that all languages have that, because they haven’t learned all of them, but many have.

Portuguese also has collocations and there arbitrary. You just need to memorize them.

Luckily — again — I have a video that talks about the prepositions that follow the most common verbs.

And below you’ll find two examples with the most common verbs that need a preposition:

Of course, there are more Portuguese mistakes that people make on a daily basis. I, for one, also make them. Nobody is perfect. But your goal should be to avoid those basic mistakes that could hamper with communication. When you make a mistake, you wanted to be a big, logical mistake. Not silly mistake like that that only flag you as a gringo.

So, do you make any of these mistakes? Or any other mistake? Let me know in the comments section below.