Demystified — The Future Subjunctive in Portuguese 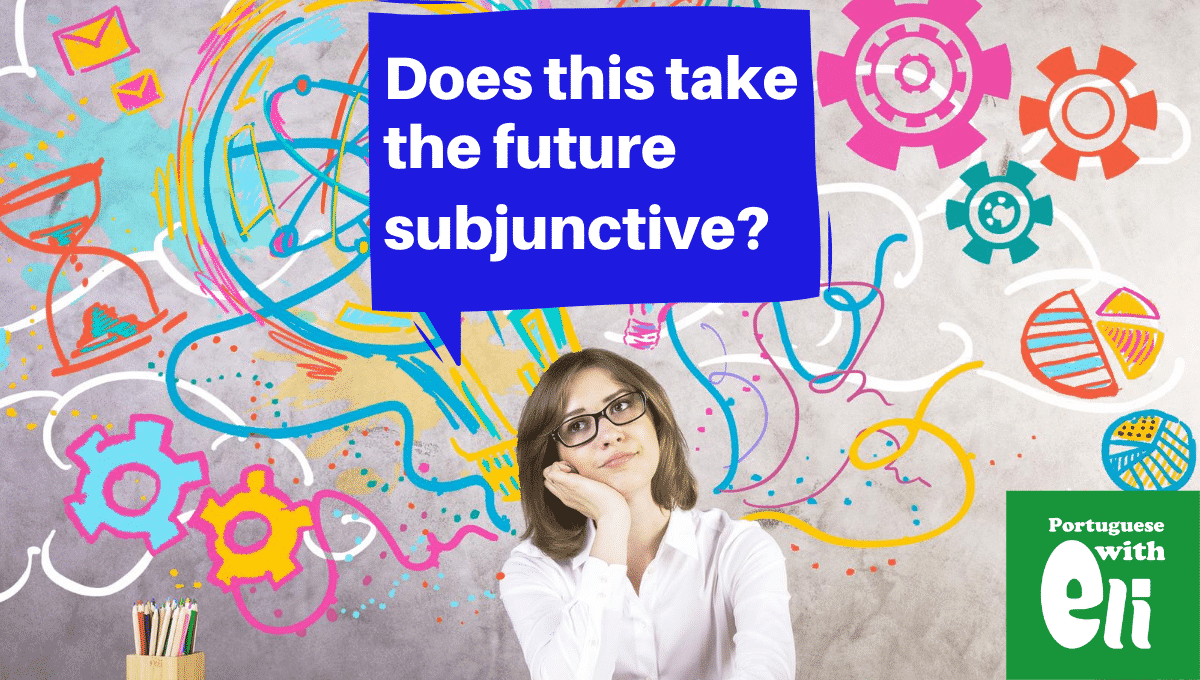 And it gets even harder when you ask so-called teachers online about this. Their answer bewilders just about anybody.

When I hear this kind of explanation, I feel like slapping someone in the face. And this someone is usually me.

And that’s because this explanation may be… True, but it sure is misleading.

As I have talked about at length in my master article about the triggers of the subjunctive in Portuguese, thinking that hypothetical situations are always expressed with the subjunctive causes a lot of unnecessary confusion.

It dictates that sentences like “I don’t know what I’m going to eat, and probably I will eat a chocolate cake” need the subjunctive. And that’s simply not true.

In fact, it’s the grammatical context that largely determines whether or not you should use the subjunctive.

And that’s true for the future subjunctive in Portuguese as well.

A Simple Trick That Will Make You a Grammar Master

You need the future subjunctive in Portuguese after conjunctions of time. You usually have two clauses — the main one and the subordinate one.

Now that we have that out of the way, let’s take a look at the conjunctions that govern the future subjunctive.

You see that “logo que” and “assim que” have both the same meaning. In everyday conversation, Brazilians tend to say “assim que” more frequently.

Also, you probably have noticed — you’re a very smart person — that I didn’t include the word “se” here. That’s on purpose. We’ll look into it in more detail presently.

If Past, Then Past

You’ve got to remember that verbs exist in a sentence and a sentence exists in a context. Everything is connected — just like me, you, and the Brazilian author Paulo Coelho.

Now, seriously, I’m saying that just to draw your attention to this important fact:

When the verb in the main clause is in the present, the subordinate clause — which takes the subjunctive — is either in the present or in the future.

And when it’s past, it’s past.

Take a look at this example:

A Big, HUGE Warning about “Se”

“Se” is the conjunction — alongside with “quando” — that usually requires either the future subjunctive or the past subjunctive.

Students tend to go all out when using “se”, and everything suddenly becomes the subjunctive.

Not so fast, friend.

When you use “se” in indirect questions, you don’t need to — and, in fact, can’t — use the future subjunctive.

“But isn’t that a subordinate clause?” The more grammatically inclined student might ask. And they would be right. That is. But it’s a special situation. Is this an indirect question? If so, you don’t need to complicate matters.

If you can follow everything at this point, you’ve probably come across the personal infinitive. It’s a funky verb tense that we have only in Portuguese (and Hungarian), as far as I know.

And just a quick plug — if you haven’t grabbed your copy of the verb report that details all essential information about verb tenses in Portuguese, do it now.

But as I was saying, you’ve probably met the personal infinitive and noticed that it looks like the future subjunctive.

Brazilians also think like that, and most of the time they make simple mistakes.

The conjunctions we saw above — antes de/que, depois de/que, até -/que — may require either the future subjunctive or the personal infinitive.

In general, there shouldn’t be any difference in meaning. But there is — a very slight difference.

Let’s take a look at some examples:

Pay close attention to sentences number 1) and 3). Both mean the same. The only difference is style.

And now take a close look at sentences number 1) and 2). Although the verb looks the same, they are different tenses. 2) is about the future — hence the future subjunctive form.

And if you will inspect sentence number 4) you’ll see a solid example of “if it’s past it’s past”.

Are these the only differences? As I said: in general, it doesn’t matter if you use either the future subjunctive (A) or the personal infinitive (B), but… (A) feels more immediate in everyday situations, and (B) tends to be favored. 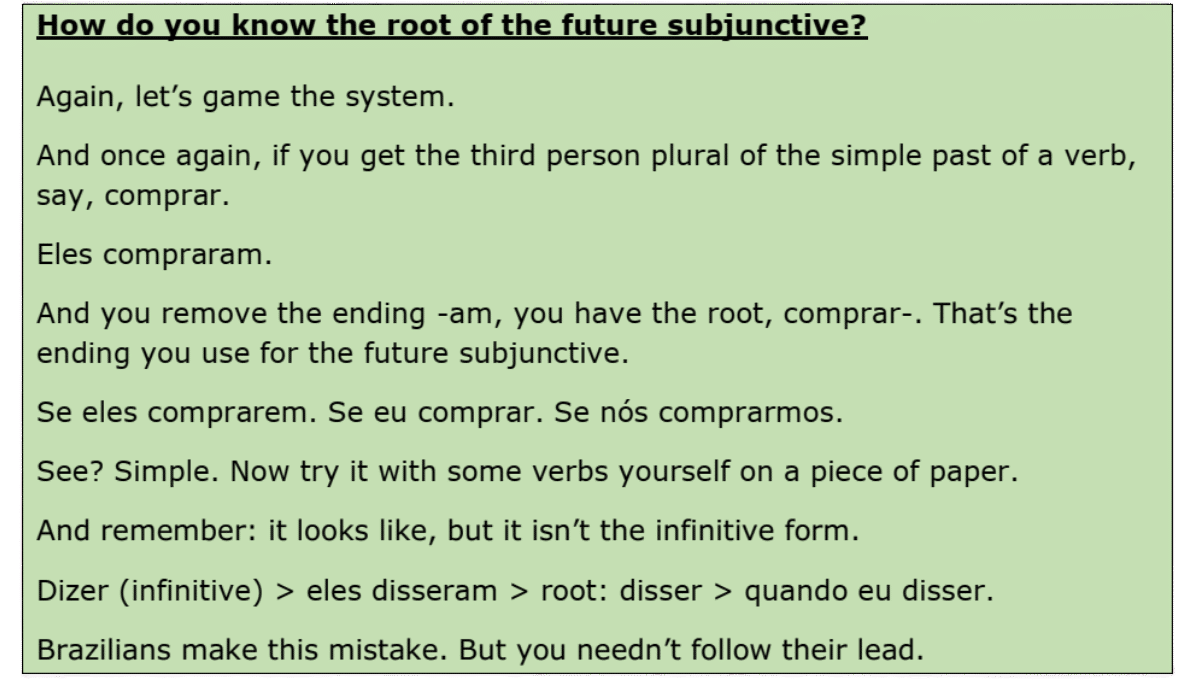 Because of the coincidence we just looked at in the previous section, many Brazilians make mistakes when using the future subjunctive.

Three verbs and their derivatives make up for about 80% of all mistakes (the stats are mine, a working teacher with 7+ years’ experience).

And the verbs are: ver (see), manter (maintain, keep), and propor (propose).

As I said, verbs like propor, depor, compor… Cause Brazilians many a headache.

Now you know it, and you don’t need to err.

Whew! That was a long trip!

Of course, we didn’t cover everything that there is about subjunctive, but if you keep at least 70% of what we’ve seen here you know more than 95% of all students of Portuguese. Believe me, you will enjoy your life much more in Portuguese now that you have this knowledge.

And again, check my content-rich grammar section for more on the subjunctive and other subjects.

And if you have any questions, ask.