The 11-Minute Trick to Telling the Time in Portuguese 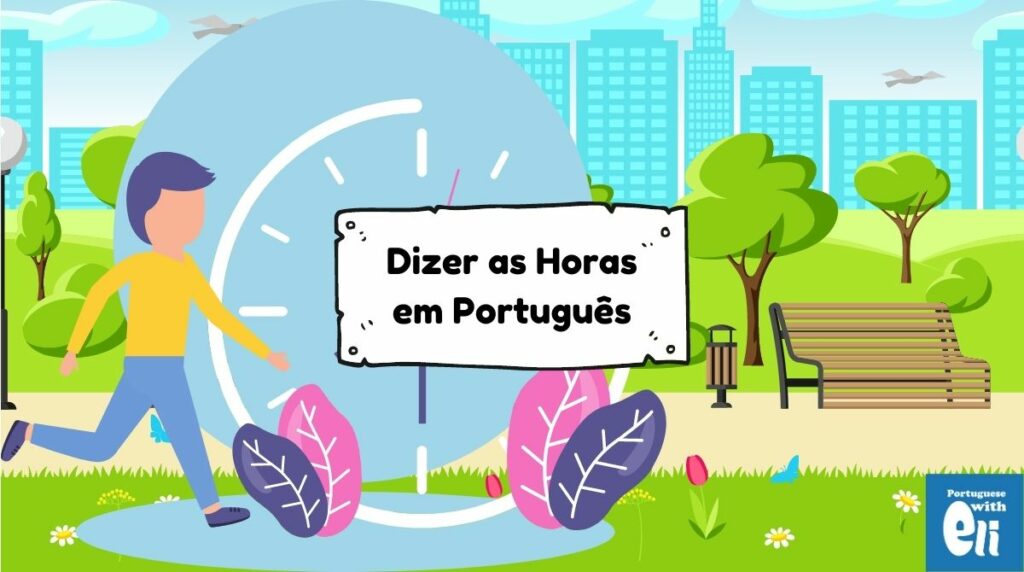 Brazilians aren’t punctual, but it doesn’t mean that telling the time in Portuguese isn’t important.

After all, you want to remind your friend Mario that he’s late.

And in this article, in less than twelve minutes, I’m going to show you how you can do that.

First Things First — Asking What the Time Is

Asking “What time is it?” in Portuguese could be easier, but it’s simple enough as it is.

In the examples below, the bracketed words mean they can be dropped in informal Portuguese.

Many of my students make the same mistake: they use the word “tempo” (time) when in Portuguese they should say “horas” (hours).

When we use the word “tempo” in Portuguese, we’re referring to a period (“quanto tempo!”) or to the weather (“tempo bom hoje, né?”).

When you’re talking about chronological time, the word hora(s) is what you’re looking for.

Another thing you should notice is that we always ask that question using the plural form (“que horas?”).

It doesn’t mean that we don’t use the singular when asking this question. We do, but once in a blue moon.

(if you prefer, you can watch the lesson below).

Replying to The Question

You just told Mario that he’s late. He asked you, “Que horas são agora?” How do you answer?

Two things you should keep in mind are:

And if you’re replying with the time something happens at, just use “à” or “às”.

Telling the Time in Portuguese in Different Periods of the Day

Over the phone, Mario asks sheepishly, “is that in the morning or in the evening?”

How do you go about scolding him?

You want to say, “in the evening, jackass”. Here is how:

And here’s how you use it in a sentence.

In the last example, you see both madrugada and manhã; in general, there’s no consensus about its usage. But most Brazilians would agree that 5 AM is manhã whereas 4 AM would be madrugada for sure.

And as one of my students reminds me often, you need to include “in the morning”, “in the evening”… all the time.

Usually, it’s clear from the context.

If you really want to make it clear that it’s two in the morning and not two p.m., then you want to include the corresponding word for it.

How about Chunks of Time?

And you said fifteen, not a quarter, because you’re smart and know that in Portuguese we don’t have such a thing as “um quarto de hora”.

But then, your friend Mario says it’s going to take him at least another thirty minutes to be there.

Here’s how he would express that in Portuguese.

This “para as” (also pronounced “pras”) is commonly used like this:

Minutes left until next hour + para as + next hour

And here are more examples:

And here is what it means:

And we usually employ this structure when twenty minutes or fewer are left until the next hour.

And the keyword here is “usually”. Some people just don’t abide by the rules.

And here are some more examples for the road.

It’s 11:30 PM and Mario hasn’t arrived yet. Quite angry, you call him and ask when he is going to arrive.

“Well,” he says. “If you could wait this long, please wait another thirty minutes.”

You do the math and say, hey, it’s going to be midnight!

How do you say that?

And just a quick thing before you leave, here’s a quick mistake you can avoid right now.

I warn you against this slip because many Brazilians never care about getting this right.

As I told you, telling the time Portuguese isn’t hard and shouldn’t take you long. After all, you should spend hours improving your Portuguese, not learning how to tell the time in Portuguese.

Of course, if you’re talking about time, you also need to know how to speak about the days of the week! (And it’s simple.)

And hey, if you want to get some more practice, you’ll probably want to learn the numbers. Or, if you’re considering having lessons, I may have something for you. Click here and find out more about having Portuguese lessons with me.