Use the Days of The Week in Portuguese like a Boss 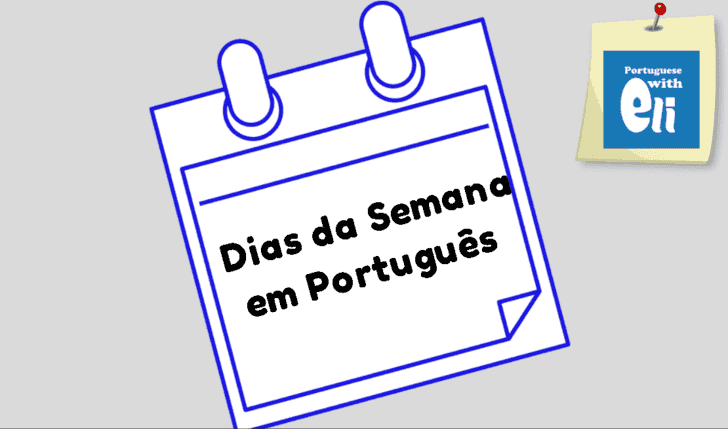 Although nothing seems to be quite straightforward in our language, using the days of the week in Portuguese is actually straightforward – once you understand the logic behind it.

Days of the Week in Portuguese and Religion

As you probably know, Portuguese as we know it has been influenced by religion since times immemorial.

You probably heard someone saying thank God in Brazil even though that person might be an overt atheist.

And with the days of the week, it is no different.

Let’s start with the word for Sunday.

As you probably know, it’s “domingo.”

If you speak Spanish, you’ll see it’s the same word.

It comes from the expression “Dies Dominica,” or “the day of the Lord.” That’s the day when God finished creating the world and wanted to take a rest.

That’s why in many Portuguese speaking countries – and many other countries for that matter – nobody should work (or works) on Sundays.

So, that Latin expression became our modern-day “domingo.”

On that day, farmers would go to the street fairs to sell their produce. It was a very busy day for everybody, and every following day farmers would do the same.

Every day between domingo and sábado (Saturday) would be called then a “fair day.” Because people work on those days, they’re also called dias úteis, or “useful days.”

The first fair took place on Sunday. The Portuguese for that would be “primeira feira” (“first fair”). But that was the day of the Lord, so it was christened “Domingo.”

👉 Days of the week in Portuguese are gendered nouns.

That means you have to add either “o” or “a” (or another article) in front of them.

Weekdays are feminine (-feira), whereas the days of the weekend are masculine.

👉 When writing, you should use the full form of the word.

But, when speaking we hardly ever use the ending -feira.

We also avoid using the ending -feira to ensure we’ll not repeat a word.

One of the things that pester my English-speaking friends is plurals. I’m sad to say that you have to pay attention to plurals also in using days of the week in Portuguese.

Every element of those words goes to plural.

I say that not to make you feel good but… You’re about to learn something that we Brazilians usually ignore.

When we talk about repeated action on a specific day of the week, we have to use the preposition “a” before it. And the word goes to plural.

However, if you’re talking about something that takes place sporadically or only once, then you have to use the preposition “em” – and remember to properly join this word with the following article.

When I say Brazilians ignore this fact, I mean that we usually mix both, and we are not very clear.

But if you intend to take CELPE-BRAS – or want to have a good and respectable Portuguese – paying attention to this rule will set you apart.

First, in street signs and other forms of quick communication, we don’t really write “segunda-feira.” You can use “2º-feira” instead.

Thus, if something’s open from Monday to Friday, you see:

We always write sábado and domingo in full.

And something I find very hard to do in foreign languages is talk about the time when involving different days.

Yesterday, today, tomorrow, the day after tomorrow – not all languages have the same concepts.

That’s why I prepared this little chart… To give you a visual representation of the way we speak here in Brazil about a sequence of days.

Well, that’s it for this article. And it’s reasonable to assume that you need to talk about the time when telling whether something is taking place on Segunda ou Sexta. If that’s the case, you can go here and find out a bit more about it.

Head over to the grammar section if you want to learn how you can put those words to use.