What’s the Difference between “Ter” and “Haver” in Portuguese 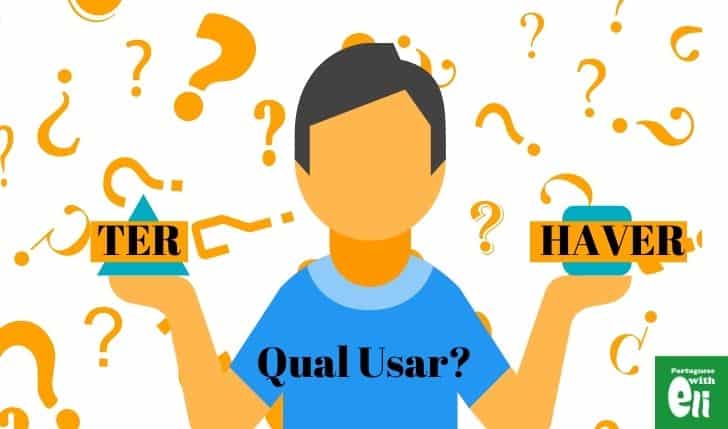 If you don’t know the difference between “ter” and “haver” in Portuguese, you’ll find out about it in this article.

(Plus a bonus few people talk about by the end of the article — stay tuned!)

You may have learned the word “ter” for there is, there are. It means have (and that’s why we Brazilians say “have three people” when we learn English).

But then you may have discovered that the word “haver” also means there is/there are.

And then, you heard of yet another word – and it happens to be a cognate: “existir.”

After all, what’s the difference between those words?

Read on, and you’ll find out.

Or, if you prefer, you can listen to our podcast episode entirely in Portuguese.

Uses of the Verb Ter in Portuguese

Talking about Existence in Portuguese

You already know that we have three words for the same concept of existence in Portuguese.

You probably realized that they sometimes can be used interchangeably.

The one thing that sometimes you fail to understand (because language learning apps aren’t that great on grammar explanations) is when you should use one or the other.

The difference isn’t that big.

Let’s take a look at the sentence “there are many people in the room.”

The first sentence is more formal.

Because of its confusing pronunciation (it sounds like the article “a” in Portuguese), we don’t usually resort to “há” in conversation.

As you’ll see in the next example, we can employ it in the past tense, but in the present tense we avoid it.

But in writing – especially in official situations – this is the preferred verb.

The second sentence doesn’t sound natural in conversation. The verb “existir” is overkill in that situation.

But it’s grammatically correct, and you could write a sentence like that.

Now, the third sentence is the way we would speak most commonly.

But because that’s the way people talk on the streets, grammarians and the language gatekeepers tend to frown upon its usage in writing.

However, it’s very common to see it.

Specially if you text your friends very often.

Let’s take a look at yet another example, but now using the simple past tense. The sentence is “there was a problem yesterday.”

Both sentences are common in speaking and writing. But if you’re writing a cover letter to apply for a job here in Brazil, you don’t want to use “teve” in your text.

And the funny thing here is that “houve” is quite common in speaking as well. It’s pronunciation sounds like the conjugation of the verb “ouvir” in the third person singular (ouve).

Common Mistakes Brazilians Make – But You Don’t Need to

As I already talked about in the past, we Brazilians aren’t the most avid readers. We aren’t very acquainted with our own language. And that lack of familiarity with the language births a lot of common mistakes.

As I said above, the pronunciation of the verb “há” (3rd person singular) sounds a lot like the article “a.”

In writing, Brazilians tend to make two kinds of mistakes.

The first one is using the article instead of the verb, resulting in sentences like:

Some are more self-conscious and know that there should be a diacritic there and end up writing:

I see that every day, and you’re likely to see it, too.

Mistakes in Writing and Speaking

Let’s take a look at yet another example. This time the sentence is “there have been many wars in the past.”

There is a peculiarity here with the verbs “ter” and “haver.” They are always conjugated in the third person singular – present or past or future – no matter how many things you’re talking about.

You see that the verb “existir” is conjugated in the plural.

But the two other verbs are not.

And that’s the common mistake Brazilians make. Even important people who should know better (like the former Minister of Justice) make the same mistake and write sentences like this:

I’m Sure I’ll Do It — Expressing Conviction

But there’s a little-talked-about-yet-so-common use of haver — when expressing the conviction that something will happen.

The structure is “haver de” + “infinitive”. In this case, you should conjugate it just like any other verb.

And when used in this way, it expresses the conviction that something will happen. It also shows that you intend to do something and are sure you’ll do it.

Now you know that whenever the verbs “ter” and “haver” are used with the meaning of “existir,” they are impersonal – which means that you don’t conjugate them in the plural – and always used in the third person singular.

And now you know that the difference is a mere question of formality. But in Brazil, we are not that formal. In most situations, you can get away with using either one.

But your fear preparing for CELPE-BRAS or CAPLE – two of the most important proficiency tests of Portuguese as a foreign language – you want to get it right.

So, do you have any questions? You can get in touch with me here or head over to the grammar section for more help.