A Beginner’s Guide to Using the Portuguese Verb Ter 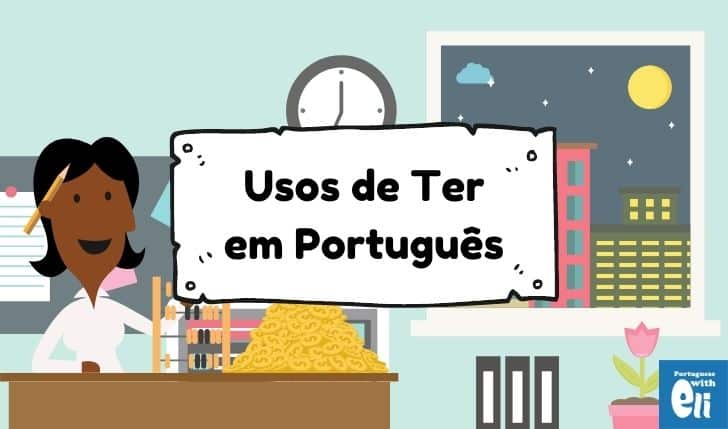 Learning how to properly use the Portuguese verb ter is a good strategy.

Especially when you’re starting out.

Imagine you want to open a new business and get rid of someone breathing down your neck. Deep diving into how to do post-sales service means you’re jumping the gun. You can’t go to more advanced stuff if you haven’t established a good foundation.

And the verb ter is part of that foundation when it comes to learning Brazilian Portuguese.

First Things First — The Conjugation of Ter In Portuguese

I’m not going to give you tables and more tables of conjugation. They are unnecessary. What’s more, these guys have done a much better job than I can at providing you with convenient and easy to use reference tables.

The only thing I want you to keep in mind is that ter is what I call “nho” verb.

All it means is that in the first person of the present tense you’ll always have this cluster — eu tenho.

The NHO verbs — vir, por, and derivatives like convir and propor — share some characteristics in common. So, this system is going to help you.

Uses of The Portuguese Verb Ter

Now we have everything we need regarding conjugation; we can move on to the most interesting stuff — meanings and phrases.

You probably know it, so I’m not going to dwell much upon using this verb to express possession.

But you’ll see in a moment that sometimes ter corresponds to a different verb than “to have”.

She Is 9 Ft. Tall — Describing Physical and Psychological Attributes

In English, sometimes we use the verb “to be” describe physical or psychological attributes. She’s 9 feet tall, the house is 80 m². In Portuguese, those instances might need “ter“.

Is There Room for One More? — Existence

You may have learned the verb haver to say “there is, there are”. But the verb ter outranks that one in the frequency of use.

It has a more informal feeling to it. If you want to know a bit more, click here to see the differences between haver and ter.

And just a quick reminder.

When using ter to indicate existence, always use the third person singular. It’s a common mistake Brazilians make, including the former Ministry of Justice.

How Old Is He? — When to Have Means to Be

In Portuguese, we’re not our age — we have our age. It’s a big shift in thinking, but it seems one that helps.

And this is the source of a very common mistake Brazilians make when speaking English. (“I have thirty-two years old.”)

Let’s take the first and the second example above.

It means basically the same. But when you have a concrete feeling or object as a complement, it has a more here-and-now feeling.

Do I Have to? — Expressing Obligation

And, of course, it’s quite simple and common. You’ll learn it by sheer repetition. Believe me.

And although some people say it like this, don’t use “tenho que” where you’d end a sentence with a preposition “I have to.” in English.

How Long Since We’ve Met?

When you’re expressing how long something has been happening or how long ago something happened, you can also use ter.

In this case, it never changes. And you can also use “haver” in this situation.

Again, if you already studied the past tense in Portuguese, you’re probably aware of the existence of two aspects — imperfect and perfect.

This is way beyond the scope of this article about ter, but if you want to use the two past tenses with more confidence in Portuguese, visit this page on the differences between past imperfect and past perfect in Portuguese.

See? Not so hard, right? And now you have laid the perfect foundation on which to build more advanced knowledge and your fluency in Portuguese.

And keep on studying! Visit our grammar page for more discussions on Portuguese verbs, their distinctions, and how to use them.

And if using the Portuguese tenses correctly and putting an end to frustration is in your plans for the future, read this report. You don’t need to thank me. See you later.