Porra in Portuguese — On Top of Everything, It Has a Family 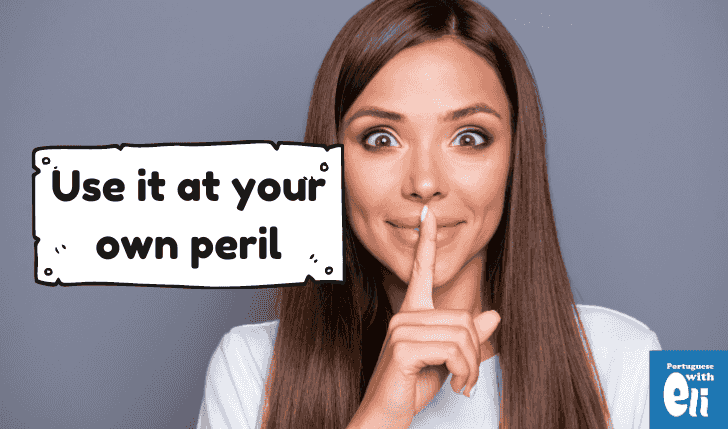 If you’ve interacted with any Brazilian friends for some time, you’ve probably heard the word porra in Portuguese.

You can’t mistake it — its abrupt pronunciation and the usual intonation Brazilians employ to make it stand out in any conversation.

If you want to know what it means, how to use it properly, and as a bonus learn lots of colloquial expressions, read on.

What does Porra Mean in Portuguese?

I will start with the meaning and then I’ll give you the story.

And here’s the story. (And in person I normally blush when I relay this etymological adventure, but it’s just me and you… So 🙂

The word porra originally described something that looked like a small truncheon.

Because it’s club-like shape resembled… Ehm… Because it resembled a penis, that’s what the word porra came to mean (a meaning since forgotten).

And by extension, it also went on to denote the sperm.

(Interested in more history? Check it out here, entirely in Portuguese.)

And that’s where the taboo comes from.

That’s a word you don’t want your seniors to catch you saying.

But Brazilians use it all the time in a variety of situations. Vulgar? Yes, but…

Even if you don’t use it — and please, don’t do it if you’re not sure you can use it — it’s good for you to understand how and when Brazilians employ it.

The Myriad of Meanings That Porra Takes

I will list five situations where porra is used most often.

But don’t think this is an exhaustive list. Your Portuguese-speaking friends tend to have a wildly colorful imagination.

They’ll certainly find a novel way to express their ideas with this word.

Here, the intonation is key. You want to look angry when you curse aloud.

We often make the first syllable nasal when porra takes this meaning.

It’s a way to differentiate it immediately from its anger-y connotation.

You’ll see that the translations don’t correspond to the register of porra in Portuguese.

Remember, we’re going from a taboo word that is employed in a variety of situations.

Even though this is a positive connotation, it’s is still a vulgar word.

In this case, it’s usually accompanied by another interjection, “EITA”.

Of the five uses listed, you really want to avoid this one. You’ll end up sounding like a teenager. Not a problem if you are one. But if you aren’t, you know the feeling.

And Porra Goes to the Market

Perhaps you have noticed or probably not, but Portuguese is strong in derivative words.

We love appending suffixes and prefixes to words. It’s our way of attaching emotion and new interpretations to worn-out expressions and words.

People also do that to a lesser degree in English. But English has a more varied vocabulary, especially when it comes to verbs.

The following words derived in one way or another from the word porra.

Not many people would say those derivatives must be avoided — they distanced themselves from their source material and lost some of the shocking factor.

It means “cool” but it’s more intense. And we normally describe things and people with that. We don’t usually employ it to show our accordance with something.

A hit, a blow, a punch, a beating… This word and compresses it all.

And just before you move on to the examples in the suggested video below, take this tip — the ending -ADA denotes a blow with something, usually the root word. Uma joelhada is a knee-kick. O joelho is the knee.

Well, I guess you can see what porrada originally meant.

A blow with the truncheon, you dirty mind.

To be dead drunk. I am including this one here because I am ecumenical. But I’ve never heard anyone saying it in the states and cities I’ve lived in.

Perhaps it’s something people from São Paulo use?

I can find it on the Internet pretty easily, though.

This expression reminds me of my time in a logistics company in Brazil. I was a blue-collar worker for a long time.

And if you’ve never worked in this kind of job, just know that being united with your friends helps more than does harm.

And this expression means — to reprimand, to scold, to tell off. But it tends to be more intense than those words I have listed in English. It involves yelling, long faces, and lots of frowning.

And in time, esporrar (the word “esporro” comes from) means “to ejaculate”. Quite vulgar.

Not So Vulgar Miscellanea

First, the Portuguese have a word of their own that comes — seemingly — from the same source we’ve been analyzing here.

But in Brazil, it doesn’t really mean anything. We don’t use it.

And what if I am a nice person and don’t want to use this curse so often as Brazilians do?

You can use the word “poxa”.

It’s pronounced with a long O and the X sounds like SH.

Because of the long O, we sometimes shorten it to “pô” rather than “poxa”.

Sometimes, we also use “puxa vida”.

We never use them as nouns — please see expressing anger above — but they can cover just about any usage you’ve learned here.

And the three first seconds of this video will show you how to imitate puxa:

A translator I really like said something I carry along with me forever.

“When you use curse words in a foreign language naturally, that’s when you’re getting really good at the language in question.”

Of course not. But they are what makes us human beings — a shared experience we all have no matter our native language.

And of course, if you want to dive a little deeper and expand your ability to express vulgarity (not judging!), check out this article.

And if you feel comfortable sharing it with me, is there anything like porra in your native language? Or in the languages you’re learning?