The Versatile E Aí in Portuguese, and How You Can Use it in Just About Every Situation 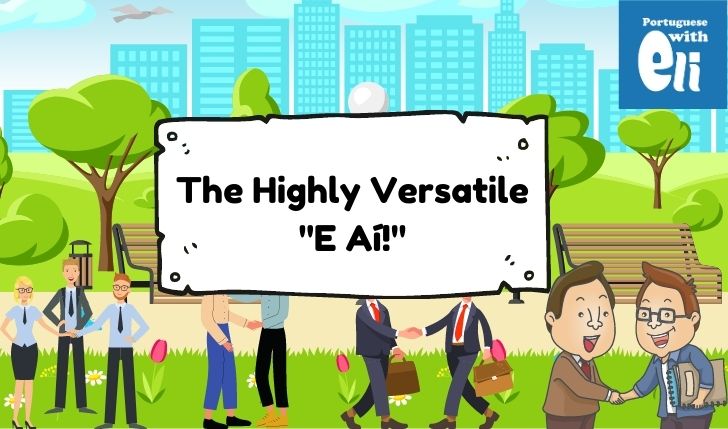 E aí is just that expression.

You’ve probably heard it on TV before. Especially if you watch Porta dos Fundos — the YouTube channel.

It’s versatile — from saying “hello” to drawing someone’s attention and then some, e aí remains one of the most commonly used expressions in Brazil nowadays.

In less than ten minutes I’m going to show you how you can speak Portuguese more fluently with one expression only.

But quickly — you don’t have that much time, and I’m not that smart (I’m taking it from my favorite writers).

John walks up to his friends and says, “E aí?”

That’s by far its most common use. You’ve probably heard that before. If you haven’t, perhaps you haven’t been in a very informal situation this far.

(And you should! Portuguese thrives in informality.)

And the best thing is, you can spice up just about any greeting by inserting “E aí?” before the greetings.

Words ending in “i” tend to change into a long, closed “ê” when you stretch their pronunciation — something Brazilians do all the time.

And one of Banda Beijo’s most famous songs illustrates my point. (the chorus means, “wait a minute. What are you thinking?”)

If you say it quickly, “EE” is the pronunciation you want. But if you stretch your vowels a bit, it changes into “AY” (as in “day”, but shorter).

Everyone gathers around Pamela. She’s a master storyteller. She knows how to tell a story, spruce it up, include details that make you sit upright, pricking up your ears.

She’s just described how her mother escaped prison harmless… But then Pamela goes silent. Wanting to know what she has to say next, you say, “E aí?”

When you want to know what’s next — if someone is telling a story or something, you can use “E aí?”

Taylor is a good guy but a terrible coworker — projects get stalled in his hand. You can never count on him to finish things in time.

A bit angry, you approach him and ask:

Whenever you want to draw someone’s attention and introduce a topic right after, you can use “E aí?”

I still remember seeing this picture a Chinese friend sent me.

It was from an English textbook. In it, a kid and a mother talked in the kitchen. The mother was preparing some food. A speech balloon hovered above each one’s head. In the child’s speech balloon one read, “mom, I’m hungry.” The student should complete the mom’s speech balloon. I imagine there was an expected answer… but the pupil wrote, “so?”

In that situation, you would use, “E aí?”

If you want to say, “so what?” with the same intonation as in English, “e daí?” is what you want.

Portuguese is a living language. It’s spoken in several countries and territories, but — IMHO — in Brazil, it has found a place to thrive and soar.

You’ll certainly see E aí being used in different contexts in Brazil, but I’m sure your friends can come up with other usages as well.

Before I leave you, I would like to ask:

Do you know any other Portuguese expression you find highly useful? Leave it in the comments section below. This is going to help not only me but your friends and fellow Portuguese learners as well.