Do I Call You Tu or Você? In Portuguese, It Matters 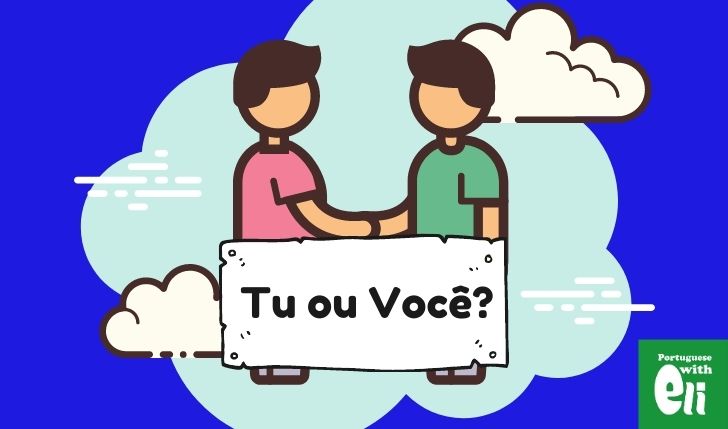 Depending on your first language, using tu or você in Portuguese may not be as straightforward.

If you go the informal route, you probably don’t want to be scolded like the teenager who called the French Prime Minister Emmanuel Macron “Manu”.

But you don’t really want to sound like someone straight from Chaucer’s time.

So, how do you go about using those two?

You will learn that in a minute.

Right now, we’re going to look into the history of those two words and how they evolved into Portuguese.

Remember: a good foundation is essential for anything else to come.

If you prefer, we have a lesson in Portuguese about it:

I’ve told elsewhere that Portuguese has 900 years of documented history.

That’s a heck of a long time.

And although we have historical registers of the language, it doesn’t mean the Portuguese we know today is the Portuguese our friends and colleagues spoke in Lisbon in 1100.

At the time, Portuguese was fresh out from Latin and kind of competed with people’s attention with other languages — Spanish and Galician. I mean, geographically they lived in the same place.

Back then, there were two ways to refer to the other person you’re talking to.

Tu has always had a more intimate feel to it. It was the word family members used to talk among themselves. Even in Latin tu was used among people who were intimate.

And it stands to reason you wouldn’t use tu when addressing someone you don’t know. You wouldn’t call the clerk “baby”.

In those instances, you would use “vós “.

Now, vós is the plural form of tu. That’s what the grammar book tells us. But why did people use the plural to talk to one single person only?

You Must Respect Me

Kings and queens existed but were not walking among us.

Whenever they went for a night out, they had an entourage with them.

A simpleton like me and you would never address the king directly. You would talk to his entourage and him as well.

That’s the idea behind “vós”.

It’s out of respect that we used this word. Even when someone is alone, they are followed by their “invisible gang”.

Respect-wise, it’s the same logic behind the reason that makes you say “yes mom” instead of “what do you want?” when your mother asks you a favor.

With time, and especially after the 1500s, people started modifying “vós”.

They started adding nouns and using its possessive form. Because of this shift, they needed to use the third person conjugation. Just like in English.

Around that time, those were the common expressions:

And the third one — Vossa Mercê — caught on. And because people used it so much and so often, it started to change.

And finally, você became wildly popular and is the standard you in Brazil.

But it’s not the only one.

Okay, but What Does It Have to Do with TU or Você?

This difference of formality will come in handy in a moment.

Back to that “respect” thing, here are three sentences that mean “mom, are you going to the supermarket today?”

And here you see, the first one uses “a senhora” (the lady, madam). That’s respectful, distant, and somewhat cold.

Some Brazilians don’t like it and usually reply “o senhor/a senhora está no céu” (“the lord/lady is in heaven.”)

And the third one (“Mãe, tu vais ao supermercado hoje?”)… Well, it’s correct but in Brazil we do it a little bit differently.

There are a few things you should keep in mind when using tu or você in Portuguese.

I mentioned above that “your mercy” required the third person. But when we use it, we are actually referring to the second person.

The second person is your interlocutor — the person you’re talking to.

The third person is the person you’re talking about.

That may cause some confusion, especially if English is your native language. There are no conjugations in your language for you to base your new knowledge on.

So, when using “você“, you need to use the third person. And if you’re feeling pretty advanced and want to use”tu”, you should use the second person conjugation.

(But hey, not in Brazil. I’ll tell you a bit more about it in a moment.)

When using tu or você, Brazilians don’t follow the rule.

That’s because when we use “tu” we hardly ever care about the right conjugation.

That’s how you would say it in “correct” Portuguese.

But that’s how most Brazilians — including me — would say it.

“Você” prevailed over “tu“, and so did its conjugation. Now, when we use “tu” we actually think “você”. Thus, we use the “você” conjugation.

Below you’ll find a map with the prevalence of tu or você in Portuguese in Brazil. The data was gathered from the Atlas Linguístico do Brasil.

In addition to the conjugation problem we saw above, “tu” and “você” influences how we use possessive nouns and adjectives.

But things get murkier when we are addressing someone directly.

The latter sentence is “wrong” for one reason — “teu” is the possessive adjective of “tu“.

To correct it, you would either replace “você” with “tu” or “teu” with “seu“.

The command form of verbs also changes according to the pronoun. Below, the sentence is “shut your mouth” (shut up!)

But does that make any difference?

Yes, if you’re studying for Celpe-Bras. But when talking everyday with your friends? They won’t even notice.

Now you’ve learned everything there’s to know about “tu” and “você” in Portuguese.

And if you are more advanced, you’ll like the video produced by Porta dos Fundos.

It pokes fun at Brazilians for their lack of familiarity with their own language.

And tell me the comments: if English is your language, how do you differentiate informal you and formal you?

If you speak other languages, is there any differentiation like this?

I’m really curious to know about it.