A Heart-to-Heart Explanation of the Portuguese Pronouns 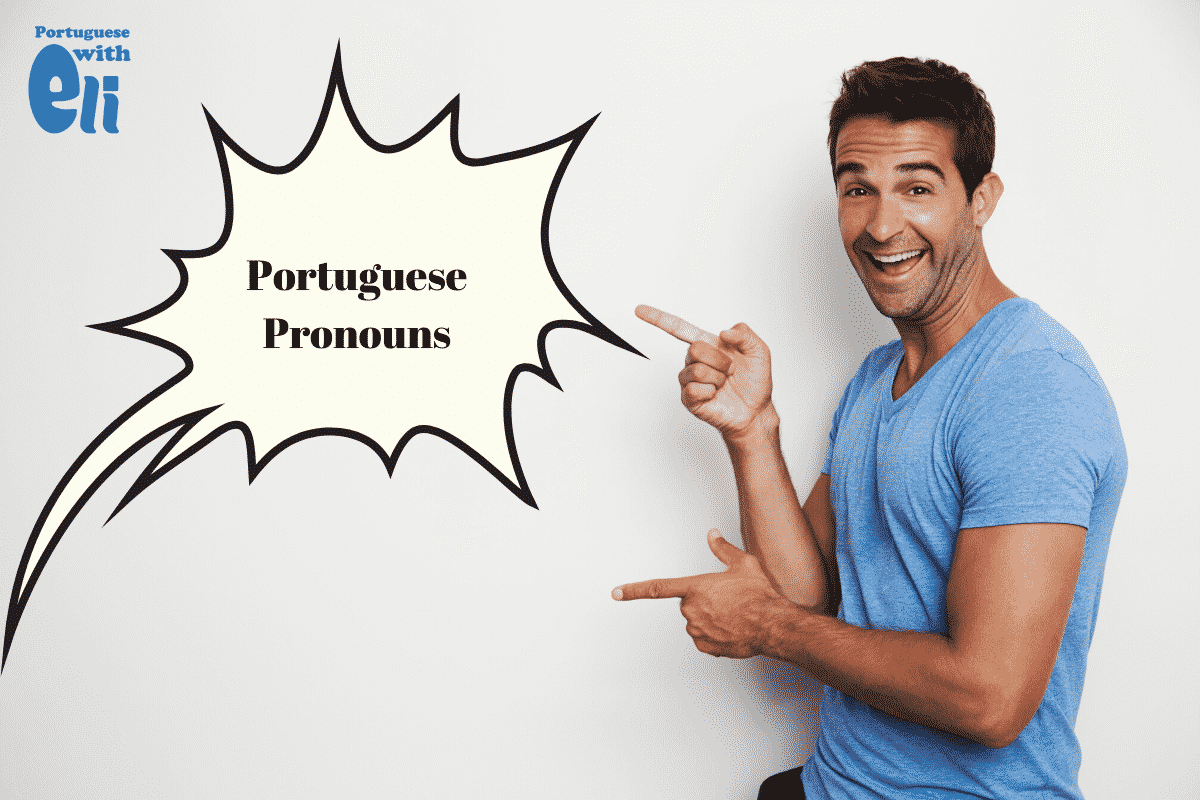 The Portuguese pronouns are words that you’ll always use, no matter what you say.

We usually learn them by brute force. By sheer repetition. And there’s nothing wrong with that.

Actually, you might even ask yourself — “why the heck do I have to study that if it’s so common and simple?”

The fact is, if you’re not a beginner, this article is going to be a refresher for you. You’ll probably learn things that apps (and possibly, teachers) haven’t taught you.

But if you are a beginner, you’ll benefit greatly from this article. By knowing what kind of mistakes and difficulties other students have had, you can avoid hours and hours of grueling work with a grammar book.

So, do you have to study Portuguese pronouns?

The short answer is: no. But you might miss out on some important details.

What They Teach You

If you’ve visited some websites or downloaded apps like Duolingo, you’ve probably seen that Portuguese has six basic personal pronouns.

Even some widely-used textbooks feature those six pronouns.

As you can see, we have equivalent systems in both Portuguese and English. But they don’t work the same way.

Also, I’ll include some Spanish here in case you speak it already. Although Spanish and Portuguese share a lot of similarities, their pronoun system doesn’t correspond 100% (specially the object pronouns).

Let’s take a look at each one of those pronouns.

In writing, you can drop it whenever you want. The verb endings tell us that you’re talking about yourself.

But in spoken Brazilian Portuguese, people tend to include it every time. It doesn’t happen only for the pronoun “eu.” You’ll see that with every other pronoun.

That’s why some people include the word “I” every time they’re writing. In writing, using this pronoun too often is considered bad practice.

You can listen to its pronunciation here.

You should learn this one but you don’t need to.

That’s because Brazilians hardly ever use that with the right conjugation.

Not only that — Brazilians are very informal people. The distinction that other European languages make between “formal you” and “informal you” exists in Portuguese, too…

But it doesn’t work the same way.

Yeah, you read it right.

Unless you want to sound like someone who is reading out poetry or some old-fashioned story, you don’t want to use this pronoun.

And if you do, you want to do it the Brazilian way. And it means using it with the wrong conjugation.

In Brazil, most people use “tu” with the conjugation for “você”. But that’s only in informal contexts and not in all regions. In my home state, we do use “tu”. I even have to pay attention to what I’m saying when I’m talking to my students — otherwise, I’ll lapse back into using it and end up teaching “bad Portuguese.”

(But in some cities, like São Luís do Maranhão, there are people who’ll use it correctly—absolutely baffling)

So, before you move on you just have to keep in mind that you don’t need to learn this one now. And if you want to pick it up in the future it will be much easier.

I put this group together because it uses the same conjugation. So, you can get that out of the way. And that fact also means that you can forget about learning all the conjugations for “tu”.

Just a quick note about pronunciation:

The diacritic above the E in “você” means that it’s the stressed syllable. The approximate pronunciation is “voh-SAY”.

You should also keep in mind that “Ele, ela, você” can also be used as object pronouns. That means, when you want to say I understand you/him/her, you could say “eu entendo você/ele/ela.”

Some bespectacled purists will turn their nose up at that. But that’s good spoken Brazilian Portuguese and shouldn’t be scoffed at.

As for pronunciation, you should bear in mind that the letter E in “Ele, Ela” doesn’t sound the same.

In Ele, it’s closed and sounds like the English “a” but not so long.

In Ela, it’s open and sounds like the first E in the word “better” as pronounced in the United States in general.

That difference is important because the word “ele” might sound like the word for the letter L or for my name.

You don’t want to confuse me in a conversation, do you?

This one is equivalent to the word “we” in English.

But we don’t use it as often in conversation.

If you’ve been to Brazil or spoken with any Brazilian, you probably know that we prefer the phrase “a gente” instead of “nós”.

Literally, “a gente” means “the people”. That’s the meaning that the Portuguese refer to when they use this word. But in Brazil, it means “we”.

“A gente” is conjugated in the third person singular, like “Ele, ela, você”.

And if you haven’t been using this phrase in conversation, you should make it a point to do so. It’s so common in Brazil that you hardly ever hear “nós” in daily conversation. And when you do, the conjugations might be wrong…

But you don’t want to use that in writing or informal situations. That’s considered bad writing. (Although I’ve worked in some companies and people weren’t uptight about using that phrase.)

Something else you should be attentive to is its pronunciation.

A great number of people will pronounce it as “naws” (kind of rhymes with “law”). But to my northeastern ears, it sounds like someone from São Paulo. Or the central region of the country.

In my home state — and in a great deal of the country — you will hear a faint E sound (“NAW-ee-s”). To me, it sounds like Jake Peralta’s pronunciation of “nice”.

And an extra tip 🙂

If you find yourself at a loss when you want to say “the people” and can’t use “a gente” (maybe because you’ve learned Spanish?), you can use “o pessoal” or “as pessoas”. Both are widely used and acceptable.

Unless you’re studying ancient literature or the Bible in Portuguese, you don’t need it at all in Brazil. But you might need it if you’re part of the comical YouTube Channel, Porta dos Fundos (with English subtitles).

We use the possessive adjectives that derive from “vós” in highly formal and ritualized situations. Congresspeople tend to use that to refer to other congresspeople. But because Brazilians don’t really respect them, they — present company included — use those expressions (“vossa excelência”, “vossa senhoria”) to make funny remarks about people we talk to. (“Quem vossa excelência pensa que é?” pretty much sounds like “who the hell do you think you are?” but said by my mom.)

Eles, Elas, Vocês — They, You Plural

Everything we said about their singular counterparts is valid for the “plural you” and “they”.

And if it’s not clear yet, this is the plural “you” you should use whenever in Brazil.

As you learned, the Tu vs. Você differs in two aspects:

1) “Tu” isn’t used in formal situations, and when it is, it’s hardly conjugated correctly (“tu vai” instead of “tu vais”). But you’ll see the right conjugation in poetry and songs.

2) “Você” can be used in both formal and informal situations. When I talk to my parents, for example, I alternate between “você” and “tu”.

But there are other ways to show respect for people.

The expression is “O senhor” / “A senhora” (the sir, the lady”) and their plural versions.

But really, though some textbooks and audio courses stress the importance of those expressions, we don’t use them as often in Brazil. Mostly when:

If you’re talking to a stranger, you can use “o senhor, a senhora.” But it’ll sound distant and cold — something Brazilians find very odd.

If you want to address someone and you don’t know his or her name, there are some words you can use:

1) moço, moça — when addressing someone younger than 40 (you don’t need to ask, just check to see whether they show signs of aging and make a guess).

2) senhor, senhora — elderly people, but depending on your tone, you might sound like a telemarketing agent… be careful.

3) oi — obviously, only to draw attention. You don’t want to call someone “oi”.

4) (if in Salvador), binho, binha — I’ll never get that one… I’m a stranger in a wonderfully strange land, and the language here works differently.

Object pronouns — what are they, where do they live?

We’re not going to study the object pronouns in-depth in this article. It would go way beyond our scope here.

But it doesn’t kill if you learn that Portuguese has several object pronouns that aren’t used in daily conversation but rather in writing.

In daily conversation, some of the personal pronouns that you’ve just seen above can also be used as object pronouns.

Let’s take a look at some examples:

That’s how you’d use those sentences in speaking.

But in writing, they should read:

I’m not saying that some people won’t   speak like that. It’s just that they sound Spock-like to me and unnatural to most Brazilians. Perhaps the former president would use it that way, but I heard through the grapevine that he’s an eternal vampire.

The Silver Lining of the Brazilian Portuguese Pronouns

As you’ve seen, we have six personal pronouns. But in fact, we don’t use two of them (tu, vós), and we have only four conjugations to learn.

First, we hardly ever use “nós” in daily, informal conversations.

Second, although in writing you can drop the pronouns — especially when the context makes it clear who’s being talked about — you can use them in speaking whenever you want. That’s especially useful when you are getting acquainted with Portuguese. And if you speak English as a native language, you might even feel more comfortable using the pronouns.

And do you know the perfect complement to the pronouns? Verb tenses—whose in-depth hand-in-hand guide can be found here.

And if you have other grammar questions, head over to our grammar section and rejoice!