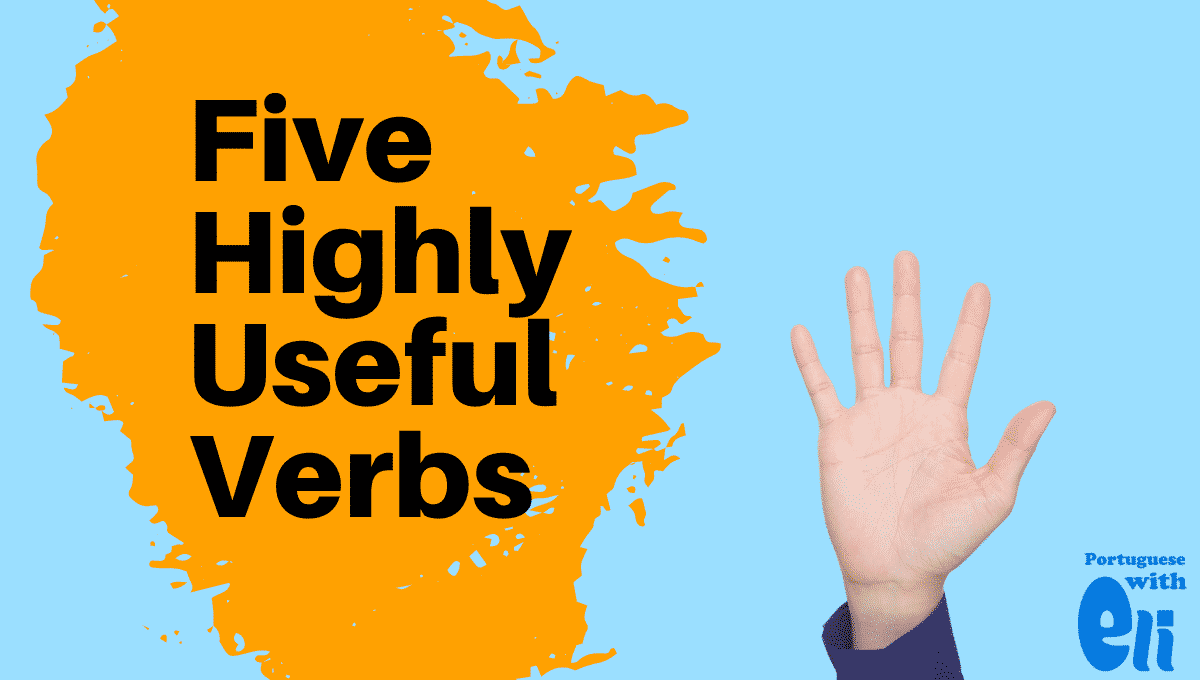 Sometimes you know exactly what you want and say… In English. You’re standing in front of your friend, saying something when you suddenly realize — I don’t know the Portuguese verb to go here.

Even though you’ve learned from apps and other teachers, you still don’t know some of the verbs that Brazilians use every day.

Don’t worry. That also happens to people learning English. It’s very hard for us to understand that English speakers have so many verbs for the simple act of walking. Saunter, stride, scuttle, sidle… The list is — to my Brazilian ears — endless.

Today, in less than ten minutes, you’re going to solve that problem with five verbs that are so common.

(And if you want to know where those came from, you can find them on our one-hour minicourse “Avoid These Gringo Mistakes“.)

Deixar is one of those verbs that have several meanings. The basic one — the meaning you probably learned from an app or your textbook — is “to leave, to permit.”

Here we are going to focus on two of them: stopping doing something and failing to do something.

That’s what you see in the following example.

Now, depending on the context, “deixar de” + infinitive might mean either “to stop doing something” or “fail to do something”. The example below illustrates that point.

I chose to translate it as “fail” because I have no context for the sentence. Depending on the situation, it could also mean “stop.”

The sentence below, on the other hand, is univocal: “stopping” would sound very weird in this context.

2) Estar com vontade de (to feel like, to be willing to)

This one is pretty straightforward.

“Estar com vontade de” means “to feel like doing something, to be willing to do something.”

You just have to bear mind that the structure “estar com” means the same as the verb “TER.” You can find out more about it in our free one-hour course “Avoid These Gringo Mistakes.”

You see that the third example translates as “to want” because — to me — be the other translations might not be as idiomatic.

3) Chegar a + infinitivo (manage to do something after a process)

This one is a complicated structure. If you grasp it correctly, you’ll be ahead of 90% of the Brazilians.

(Okay, 90% may be too much, but just ask any Brazilian to explain the structure to you and you’ll see people hemming and hawing.)

“Chegar a” + infinitive means “to manage to do something after a process, and usually a long one.”

That’s the short explanation. Let’s put on our explorer hats and do some digging.

Let’s say the sentence was prompted by the question “have you ever read Harry Potter?” If you just answered “Não li” that would be okay. But the implied meaning is that you didn’t even try. You categorically refused to read it, perhaps.

When you say “Não cheguei a ler Harry Potter,” it implies that maybe you had the idea… Or might have tried it… But at the end of the day you decided against it.

So, another possible translation might be “I didn’t really read Harry Potter.”

All right. Now let’s move on to another example.

You see that I chose to include the word “even” between brackets. That’s because you did all the exercises but didn’t understand the subject very well. That sentence has an apologetic tone to it.

If you had said “Fiz todos os exercícios” it would have been more direct. You might even be angry about the whole thing.

And also, “cheguei a fazer” emphasizes the duration of the process. It’s clear to us that it took you some time to go over all the exercises. “Fiz” focuses on the action itself.

One more example to make you happy.

Again, you’ll see that obtrusive “even” in the translation.

This little sentence suggests the following context: you shouldn’t have been bothered by that, or that shouldn’t be annoying because it was so unimportant or trivial. But anyway, it managed to annoy you. Other people might not be annoyed, but you were.

And another example for the road. This one follows the same logic of the last two ones.

Whew! Finally a simple one.

Just remember to include the linking “a” and everything will be okay.

And this one will make your Portuguese sound way (waaaay) more Brazilian than any other verb you might learn in fifty seconds.

This structure means “perhaps, likely, probably, maybe.” And it’s so common and pervasive in spoken Portuguese that we don’t even notice it.

You probably noticed that I employed the “personal infinitive” when using this structure. If it’s not clear, just read the third example once again.

If you weren’t using the personal infinitive, then it should read “É capaz de mim…” But you don’t want to do that. That sounds like something Tarzan would say. And really, even the most illiterate Brazilian will never say that. It just sounds ungrammatical.

So, review this article once again. These five verbs will boost your understanding and expression in Portuguese. Of course, you’ll find many more verbs along your journey. Portuguese is a living language and it changes every day.

If you want to discover the other twelve Portuguese verbs that are likely to give you the most headache in the beginning and even after you’ve reached the intermediate level — go here for our FREE one-hour course.

And for more vocabulary discussions, you can always visit our vocabulary section.