Five Uses of Ficar in Portuguese that Every Brazilian Hears Daily 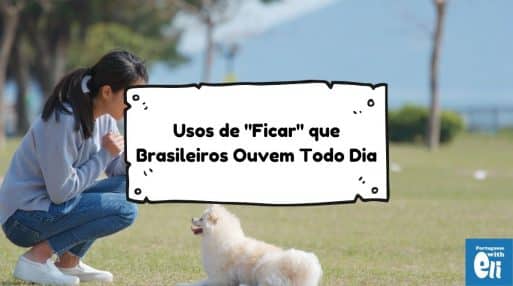 Stay with me for a moment.

Wouldn’t it be good if you learned one single word that gave you so much conversation power you could use it in almost any exchange you have?

That’s the verb “ficar” in Portuguese.

With 10+ meanings, it’s one of the most versatile verbs around.

In fact, you could hold an entire conversation using it to replace many of the other verbs that you need to use — but that don’t come to your mind easily.

A Jack of All Trades

When used in conjunction with the verbs “dar” and “fazer”, “ficar” can improve your vocabulary like this.

That’s because it’s so flexible you can use it in almost any sentence.

Okay, okay. You might be worrying about the paucity of your vocabulary. You would be repeating words a lot.

But hey, we are talking about colloquial Portuguese here.

It’s what people talk every day. You do need a very solid command of as many words as you can. You want to express yourself the way you are. But using a variety of words shouldn’t be a hindrance to your progress.

Now, let’s take a look at six of the most common meanings of the verb “ficar” in Portuguese.

Originally, “ficar” means “to stay, to remain” in Portuguese.

That’s what you would say to Fido to train him.

2. The Transition from One State/Emotion to Another

Do you get angry when you watch political debates on TV?

Does the weather get very hot during summer in your hometown?

Questions like these in English use the verb “get”. And, if you were coming from Henry James’s books, you would use “to become”.

This is when you use “ficar”.

3. Location of Something That Doesn’t Move

I call “things that don’t move” those buildings, rooms, towns, cities… even countries.

They don’t usually move. Unless there is an earthquake or something, but it’s a big stretch to think that way.

And if I were you, I’d pay close attention to how Brazilians use this word. It pops up in every conversation.

And because I know you’re very clever, I can almost hear you asking:

Here’s where “ficar” overlaps with another serviceable Portuguese verb, “ser”. I’m using the same examples as above now, but I replaced the main verb.

How to Use Ser and Estar in Portuguese

4. When Talking about the Result of an Action

Here we get a bit philosophical.

You might say for example that you got angry because someone made you angry, hence the result of an action.

And you would be right.

But that’s also the transition from one emotion — neutrality — to another — anger.

So, you probably see the general meaning here… That of a transition.

When you make a cake and give it to a friend, and they want to pay a compliment to how good a cook you are, your friend’ll probably say “este bolo ficou muito bom!”

That’s because the cake being tasty was the result of your expertise at baking cakes.

Let’s take a look at some more examples. 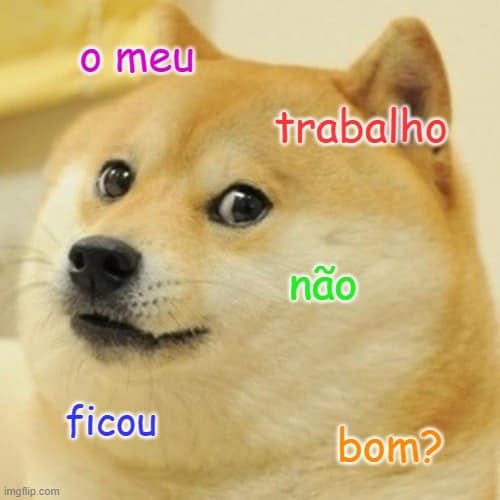 If you have a kid — or intend to have one — you probably realize that children love asking questions.

That’s a good habit, by the way.

But, you see, when they assault you with questions, you might think it very annoying.

And it’s that annoyance you convey when using “verb” + the gerund (the -ando, -endo, -indo endings).

It’s so insistent or repetitive that it annoys you.

But you could see that in the third example it’s not “annoying”. It’s just insistent. The speaker perhaps doesn’t like it, so that’s why they say the last bit of that sentence.

This is an extra meaning that I couldn’t really leave out.

If you’re speaking with Brazilian friends or colleagues, this sense of the verb “ficar” is going to pop up very frequently.

Unfortunately, I wasn’t born a completely bilingual individual. My English doesn’t really reach the whole range of emotion that the verb “ficar” brings to the table in this instance.

The closest I could come to was “make out”, “neck”, and “date informally”.

Straight out “date” wouldn’t work. It sounds a bit too formal.

“Ficar” gets across the sense of “no strings attached.”

Take a look at these examples and you’ll see what I’m talking about.

I said in the introduction that the verb “ficar” in Portuguese has 10+ meanings.

And that’s true. My trustee dictionary lists more than twenty meanings. That’ll be a lot to take in in one sitting.

These were the most common uses of “ficar”. My suggestion for you is this:

Pay attention to how Brazilians speak. Active attention can help you greatly improve your listening comprehension and vocabulary acquisition.

And of course, reading is the second-best thing you can do when you don’t have a Brazilian friend or teacher (and why don’t you have a teacher?) available to speak.

It’s crafted using my Easy Portuguese™ method for composing texts that will help you bridge the gap from “okay” Portuguese to very good Portuguese.

And of course, to learn more verbs that will help you speak more naturally and help you understand what your friends are talking about, visit our vocabulary section.