Discover The Difference Between Tudo and Todo In Portuguese 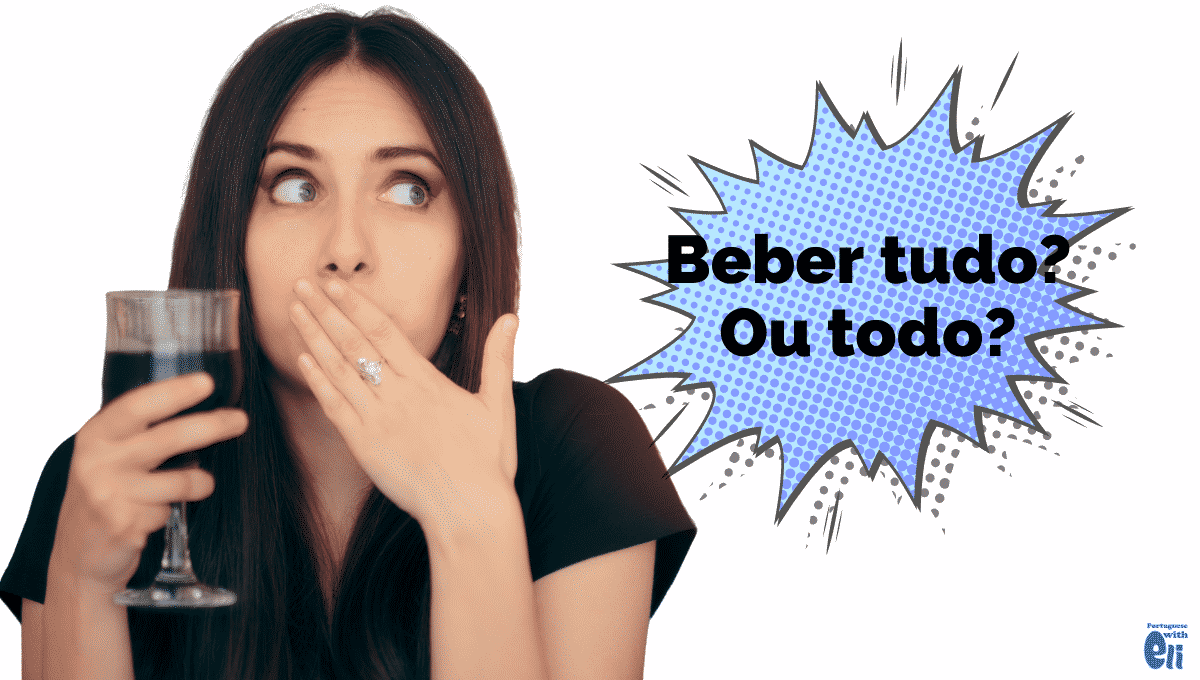 One of my Spanish-speaking friends always had trouble understanding the difference between “tudo” and “todo” in Portuguese. In a conversation with him, a sentence like “eu vejo tudas as novelas” (I see all the soap operas) was likely to pop up.

It seemed to be a problem exclusive to Spanish-speaking learners of Portuguese… But I was mistaken.

One of my students struggled with that for about two months. At the time, we had about one lesson every two weeks — in between, he would strike up conversations with friends in Portuguese.

Sometimes he got it right — yay — but sometimes he got extremely frustrated about it. Why the heck do you guys have such similar words with so many meanings?

Fair enough. But then, when I noticed he hadn’t grasped this teeny-weeny part of the puzzle, I could finally help.

And here’s what I did.

The Pronunciation of Tudo and Todo

This is the first thing we have to get out of the way.

Especially to English-speaking ears, “tudo” and “todo” sound almost the same. To Brazilians, the difference means a world (and I mean it, more and that in a second).

You should pronounce “tudo” with round, protruded lips, the same use for booing bad performers on stage.

The first “o” in “todo” is closer to “oh, he didn’t!” You shouldn’t protrude your lips when pronouncing this word.

Below, you’ll find my reading of the examples. Listen for the difference, and practice it yourself.

Even if you are not grammatically inclined, you will understand that “tudo” means ” everything” and that it’s a noun.

As such, you can’t say things like “tudas as novelas.”

But there is one more thing: “tudo” is the only form and shape you’ll find this word in. There is no feminine, no plural, no anything…

And whenever you use it, you should bear in mind that it is a third-person “pronoun.”

And as such, you can’t say “tudo estão bem” — although I can see the logic.

Let’s take a look at some examples to deepen your knowledge.

As you can see in the fourth example, “tudo” is the opposite of “nada.”

(And hey, don’t quit yet — down below you’ll find a section that details some interesting and informal uses of “TUDO.”)

You don’t really want to get caught up in grammatical explanations and translations, do you? We need them to some extent. But let’s not complicate things.

“Todo” is an adjective. You may have learned that an adjective modifies a noun. It’s a modifier. And as such, it needs to be paired up with another word… Or else, it won’t make sense.

Also, bear in mind that “todo” can also be modified — it has to agree with the noun it follows. Thus:

Now, “todo” has three basic meanings: every, any, entire.

Todo as Every, All

You’ll see that some of the translations aren’t idiomatic. I did so to draw your attention to the difference between singular and plural when we use the word “todo” in the sense of all, every.

At first blush, you might imagine that both sentences mean “all the world.” Unfortunately, that may not be the case (but it may, attention).

Both expressions mean “everybody” and both are acceptable… Though some grammarians prefer the first one in writing. In speaking, there isn’t any difference. And you will actually have a hard time trying to pronounce “todo o mundo” fast and making the article “O” sound clearly.

But, if what you mean is the whole world, you can either use:

The article is mandatory here.

You’ll see that in my translation I used “every” for the second example. When the implied meaning is “no matter what thing,” “indiscriminately,” then “todo” can be used.

You’ll notice that it’s in the singular form it doesn’t take the article.

The difference between Todo as Entire, Whole and Todo as Every, All is very slight. But it’s there.

We understand that you are not excluding any individual.

But, when you say:

It’s clear to us that you mean the duration of something.

The really astute student — and by that I mean you — asks:

But isn’t that similar to “cada filme”?

You can’t begin to understand how happy you make me.

I already prepared an in-depth article about the difference between “todo” and “cada” in Portuguese. Go there now and read it after you finish with this one.

In the Media, Daily Life, and Conversations

You can sound more Brazilian with it and don’t have to work much for that.

How? It’s because “tudo” can also be used in the construction “é tudo, são tudo + adjective” (everybody, they all are + adjective.)

A good example is what Rubens Ricupero said of the politicians in Brazil in 1994.

Again, “tudo” doesn’t change — even if you use it in the plural.

This second usage is considered bad Portuguese. But, that’s how people talk every day. Don’t pay attention to people who say otherwise.

You also can use “tudinho” for “tudo” when you want to be more emphatic.

A parent might say “você tem que comer tudinho” (You’ve got to eat everything) to a child. And the child would know she couldn’t leave a single pea.

Well, and for you to practice a little bit more — and if you’re feeling pretty advanced today — you can listen to the song “Como Nossos Pais”. Elis Regina emphasizes the TUDO here, and you’ll never forget.

If you liked this article, you’ll probably love our newsletter and the bonus gift I have for my subscribers.

Every day, you can increase your confidence in your Portuguese speaking (and reading) skills and, someday, you’ll simply come up with words you didn’t know you could say before. Just imagine… the exhilaration of speaking Portuguese naturally and authentically!

Well, go here and request your bonus and registration now 🙂