How to Finally Use Todo and Cada in Portuguese 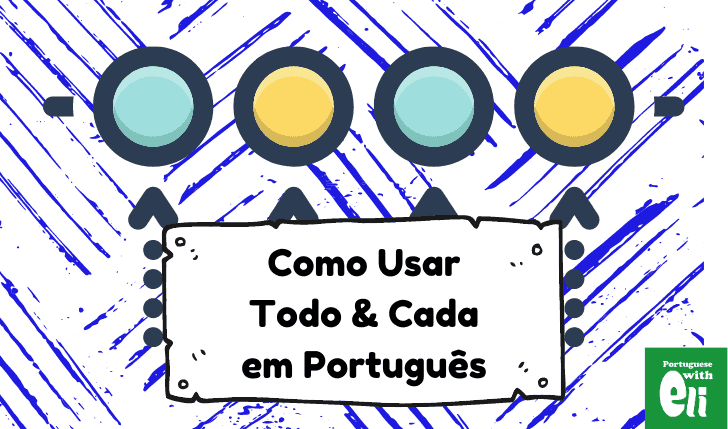 Knowing how to use Todo and Cada in Portuguese may be a headache. After all, both words mean “every/each.” But their usage is not the same.

While I cannot offer you a definitive guide on how to use them, I can give you some general guidelines to help you figure out why we use one instead of the other.

Below you will find the rules.

Rule #0:  always pay attention to how people use them.

If you really want to internalize how Brazilians use those words – and any word for that matter – you have to pay attention to how people use them.

Quite frankly, it’s like the old adage, “you see it, you do it.”

One of the ways you can do it is by watching videos and short interviews and tuning in on what they say.

And you know that feeling when you already know what you want to say but don’t know how to say it?

It’s likely because you struggle with verbs. They may slow you down, they may frustrate you. But you can find a simple solution when you know how to use the tenses—here. Only then can you tackle things like “todo” and “cada”.

Rules for Cada in Portuguese

Whenever you mean “each one of a group, every single one,” cada is the word you need. It individualizes whatever is being talked about. Take a look at the examples below:

Whenever you can insert “each one of” and it makes sense, you know what word you need.

Rule #2: Cada emphasizes the thing being talked about

Well, it makes sense, right? After all, if you set something apart, it means you are emphasizing this item.

Take a look at the examples below:

English is not my mother tongue, but, because I hear that “each and every” part very often, it gives me the same feeling that I have when I hear the word cada being used in this context.

Rule #3: Cada is not variable

It means that no matter what word it refers to cada never agrees or changes its form because of the following word.

The next word we are about to study is variable, so it’s a good thing to keep an eye for that.

This is a very colloquial usage of the word cada. If you master this one, your Portuguese will sound very Brazilian.

We use the word “cada” when we want to show some feeling of astonishment or surprise at something. It may be positive or negative.

Take a look at the examples below:

As you can see from the translations above, it is a kind of emphasis, but the main meaning here is this surprise that you feel at seeing or knowing something.

How to Use Todo in Portuguese

You remember that “cada” individualizes each element in a group.

If you’re talking about each and every student, and you have the sensation that you can see each one of them in the eye of your mind, “cada” is the word you need.

But, if you see each member of a group as an undistinguished element (i.e. “general”), then “Todo” is the word you are looking for.

You see some of the translations are not idiomatic, but they do reflect the actual word usage in Portuguese.

Rule #6: when you’re considering something in its entirety, use Todo

Here you will need to pay attention to two things:

1) Using “Todo” in this way also requires the article.

2) Word placement here is quite flexible, and the difference is in emphasis. As a general rule, whatever comes last gets more attention.

So, depending on what you mean and how you mean it, you might want to change the word order just a bit.

When you’re considering something in its entirety, Todo is the word you need.

But as we’ve warned above, you need to pay attention to some things you can see in the examples below.

When you have a structure like the last sentence above, inverting the word order for “Todo” and the thing being talked about doesn’t work very well. It is understandable, though.

And as we have said, the best way for you to understand and internalize the usage of these words – and any word – is to pay attention to how people use it.

In the video below, you will find extra explanations and exercises at the end of the video.

And as always, if you’ve struggled with Portuguese grammar and want to master it and crush all the frustration, head over to our content-rich grammar section 🙂