Quick Fix for Your Portuguese Possessive Adjectives… And Pronouns, Too 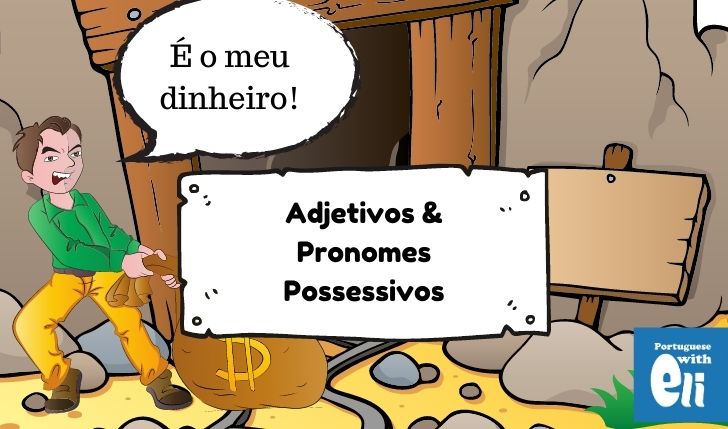 You should only move on when you grasp the Portuguese possessive adjectives correctly.

It’s like when you’re driving long distance. Your destination is working fluency. And your car’s Portuguese.

If you have a bad car, you’ll be stopping more frequently than not. If the engine is okay and the tires are new, you won’t probably face as many difficulties as you would otherwise.

And let’s face it, most people have a bad car Portuguese-wise.

And that’s perfectly fine — as long as they keep fixing and improving their vehicles.

And in this short article, you’ll discover how you can power up your Portuguese with one simple adjustment.

You probably learned that an adjective’s a modifier. And, a modifier should precede the word it modifies.

That’s also true for Portuguese possessive adjectives but we do have quite a few exceptions.

First, let’s take a look at the possessive adjectives that exist in modern Brazilian Portuguese.

And as much as my professorial sense urges me to give you a lengthy explanation, I’ll just give you some examples of those possessive adjectives in use:

First, Where do They Go? Before or After the Noun?

Usually, you can place them only before the nouns:

But sometimes you can place them after the noun.

This happens when you choose to use the indefinite article, for example:

And you see I included “dele, dela” in my table above?

Not all textbooks do that. They usually teach you “his/her” as “seu, sua”. This causes a lot of confusion, since “seu, sua” also means “yours”.

And dele/dela is always (always!) placed AFTER the noun, never before it.

Do I Have to Insert the Article Before The Possessive Adjective?

Even if you have never asked that question, you’ll probably come across the following sentence:

You see that there is no definite article before the word “meu”.

But you’ve probably heard its variation:

Some people will tell you that you should never use the definite article (a, o) before possessive adjectives in Portuguese. Nah. If you probe further you’ll never get a clear answer from them.

Surprise, surprise: they don’t know why.

Using it or not using it is not wrong. It’s a matter of personal choice and style.

The folks at Ciberdúvidas da Língua Portuguesa back me up on this one.

So, the following sentences have absolutely the same meaning.

Did He Break Your Leg? How Come?

Even though I listed above the word “seu, sua” as a translation for “his/her,” in Brazil we avoid that.

And the reason for this avoidance is compelling.

Ricardo comes up to Maria and says:

The disconnect here took place in that little word, “sua.”

It means “his, her.” But “your” is also a possible translation.

And “your” is usually the first meaning that comes to mind when we hear the word “seu, sua”.

And now, here’s the dialogue again but in a way Brazilians would say it.

And as you can see, you place dele after the noun it refers to. The other possessive adjectives go before the noun.

(well, that may change, and I suggest you read on to find out more.)

We don’t really expect John to go around breaking other people’s legs. And if you hurt a hand, chances are it’s your hand and not Jessica’s or Paolo’s…

Well, it’s just a fancy way to say that we don’t use the possessive adjectives for parts of the body as often as you do in English.

If I said, “John broke his leg,” I’d probably express it like this:

And Who Does It Agree with?

I know you must be tired of knowing that the garden is masculine but the door is feminine… It just doesn’t make sense.

And something else that should do some agreeing here is the noun and the adjectives that are attached to it.

And that is valid for possessive adjectives, too.

You see that the possessive (sua) agrees with the noun (tia). It doesn’t matter if the person I’m speaking to is a man or a woman.

A common mistake I see is this —

I’m speaking to a man and I want to say “your aunt”. Because my interlocutor is a man, I say:

it’s a simple mistake, sure. But it’s one that creeps up from time to time in my friends’ Portuguese.

And How About the Possessive Pronouns in Portuguese?

They look like the possessive adjectives you saw above.

The only difference lies in how you use them.

Possessive adjectives have to have a noun to refer to. My book, your friend.

Possessive pronouns in Portuguese don’t need to refer to anybody. You see, they can be either the subject or the object — or both — in a sentence.

And you’ve probably noticed that I included the definite article before the possessive pronouns.

Here’s a writer-downer for you: we have to use the article with the possessive pronouns in Portuguese. Thus:

You remember I said above you could use the definite article was a possessive adjective?

I’m sure you do, but just to play safe, take a look at the following example:

What happens if you have to use “todo” (all) before it?

If you’ve read this article, you probably know that you have to use the definite article with “todo” when it comes before nouns (see more on todo and cada here).

But if you’ve heard a Brazilian saying the sentence aloud, you sure know it doesn’t sound like they’re using the article.

It’s because we blend the pronunciation.

The “o” blend together and should sound like one word.

Whenever you write it, you should be a good person who remembers to include the article.

But Eli, I see none of my friends use that!

“If your friends told you to jump off the cliff would you jump?”

That’s what my mom would say.

What I say is — you can do the same. Just remember it’s not strictly correct.

And here are some more examples for your benefit.

(Bad taste in examples, I know. But I want them to stick in your mind.)

Now, how do you feel after this quick visit to Uncle Eli’s car shop?

You have a much more robust Portuguese than before, one that will carry you very far.

And since you’ve been learning a bit about the Portuguese possessive adjectives, you’ll probably want to see the following article:

Portuguese Adjectives Placement — How Does It Matter?

And if you haven’t yet, head over to our home page where you’ll find our exclusive assessment to see your level of Portuguese accurately.

And as always, if you have any questions, write them in the comments section below.