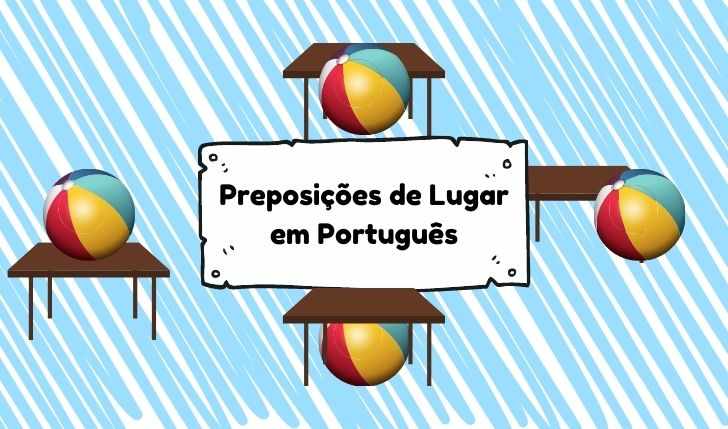 You probably hate it.

Using Portuguese prepositions of place isn’t quite straightforward. Some of them change, some of them accept contractions, and some of them don’t translate well into English.

What’s more, Internet guides on Portuguese prepositions jumble all of them together without giving you proper categories and systematization.

And without proper structure, most people fail to grasp the point.

You have to have a blueprint. And you must start building the house from the foundation.

If you go to Home Depot and buy the decoration before the house is made, you’re in for a lot of trouble.

And that’s what happens when you have a huge list of prepositions without a solid foundation.

And in this article, you’ll have both — a solid foundation and the decoration items for you to beautify your house.

If you’re reading this, you speak English. Period.

And you know that prepositions are those little words that we sometimes put between other longer words and after verbs.

In Portuguese, it’s the same.

The prepositions help us clarify the relationship between words.

If I say “I live in Minnesota,” you know that Minnesota is my living place because of the preposition “in”.

If I said, “I live for Minnesota”, I would have a completely different situation.

So, the Portuguese prepositions of place help us clarify where something is.

And although the list is long, we can bear in mind that they’ll always express one of the following kinds of relationship:

3 — being inside or outside.

Now, with that in mind, let’s take a look at the most useful Portuguese prepositions of place.

Just a quick caveat before we begin with our in-depth analysis.

Not all prepositions translate perfectly into English. (Just look at what happens when they pair up with verbs!)

I’ll include here the most common translations. But you’re very likely to stumble upon a different use.

In addition to other meanings, the preposition “A” also expresses the location where something is at.

As you could see in both examples, there’s either a diacritic or an outright article.

Some prepositions contract with articles.

In Portuguese, the preposition “em” expresses many relationships between words.

Being on Top of Something

If you have a Brazilian friend, you might hear from him or her the following mistake:

I’m here between my friends.

But he is clearly among friends.

That kind of mistake happens because “entre” means both between (1) and among (2).

Prepositional Phrases… What the Heck Is That?

When you buy an egg, it’s an egg… Individually.

But when you buy a cake — which has quite a few eggs in it — the egg is not an egg anymore.

The same transformation happens with prepositions.

Individually, they are prepositions. Collectively, they become prepositional phrases. That means, the band together to form a phrase that works like a preposition.

And what you can see from now on are Portuguese prepositional phrases of place.

(If you want to speak chique Portuguese, drop that terminology in a conversation every now and then.)

Although this prepositional phrase is separate, it’s pronounced as if it’s only one word.

And that pronunciation is the source of a common mistake Brazilians make. They write “emcima” instead of “em cima”.

Watch out for that.

And what’s the difference between “em cima de” and “em”?

But in some situations, you might need to express yourself precisely with “em cima”. It’s univocal.

Dentro de (Being Inside)

Again, there is no difference between this preposition and “em”. It’s just a matter of being precise.

When speaking fast, Brazilians blend dentro + de. The “tro” part disappears, and what we say is “DENde.”

The quick note here is — those two phrases express the same thing.

But because of the spelling mistake we saw above (encima*), Brazilians tend to misspell “embaixo de”.

Embaixo is always one word when it has this meaning. (But in Portugal it’s different.)

The learned version of this phrase is: ao lado de. But Brazilians will also say “do lado de”.

And do lado de is so much more common in speaking…

No significant note for this one. Plow ahead.

Em Frente A, Na Frente De (In Front Of)

Just pay attention to the final preposition and the first one.

When using “em frente,” choose A.

Perto De (Near, Close By)

The important note about this one is: PERTO never agrees with any noun.

So, a common mistake some of my students made before was: ela está perta daqui. (She’s near here, close by).

Your best bet is to memorize some of the phrases here — the useful ones. Hopefully, the structures will sink in. And you’ll use them naturally.

Divide and conquer. Don’t waste your time with long tables are prepositions. They’re useful as a reminder, never as a primary learning tool.

Use the sentences here to do this exercise — borrowing the same structures, write variations of the sentences, and say them out loud. It will help you consolidate the knowledge you just acquired.

Write a sentence or two using the prepositions you just learned. I will offer suggestions and recommendations.

And if you’ve been learning for some time and want to make sure you know exactly where you’re going and what you’re doing — eliminating all the frustration and guessing — take our exclusive point-by-point assessment and diagnosis. You can find it on the homepage.