Avoid Trouble with the Passive Voice in Portuguese 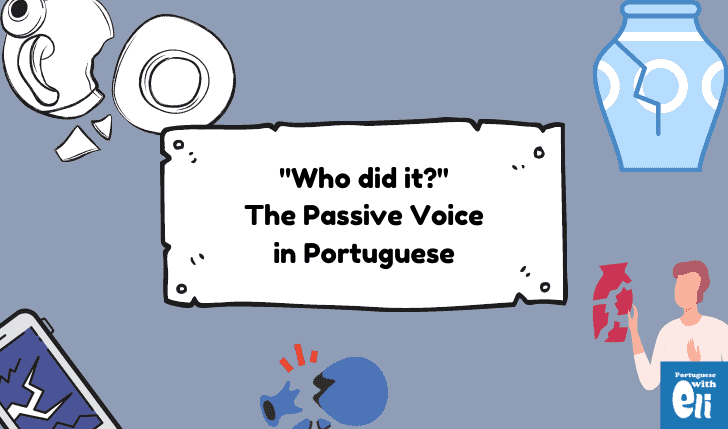 I’m starting with a personal story but very soon I’ll turn to the passive voice in Portuguese.

When I was about twelve, I wasn’t the most articulate of children. I loved food, too.

So, when I wanted to eat something, I usually just said it as easy as I could, not elaborating much.

But sometimes I wouldn’t ask for food. I would go there and eat it.

On a particular day, my mom had made pasta with ragu-like tomato sauce. We lived in a tight financial situation, so having that dish made everybody happy.

But my mom had told me that I shouldn’t eat that before she came back home.

I obeyed her orders however hard it was.

But my father didn’t care. He wasn’t home when she cooked it. And after an afternoon drinking with friends, he was ravenous.

He ate every last bit of the pasta, went upstairs, and fell asleep.

When my mom got home, she didn’t even say good evening — she dashed straight to the kitchen to check whether her pasta was still there.

Not finding the dish she left there a couple of hours before, she came up to me and asked once, “who did it?”

Instead of saying, “it was dad” I cowered and said “the pasta was eaten and it wasn’t by me!”

I didn’t have a chance. I should’ve said who did it directly.

And if I had done so, I would have used the active voice.

But no, I decided to take it on me and use the passive voice trying to cover for what my dad did.

I’ll tell you in a moment what happened thereafter. But now let’s talk a bit about the passive voice in Portuguese.

Active and Passive Voice in Portuguese

As a linguist, I love lengthy explanations and discussions about grammar and usage.

But as a worker and someone who has a life to take care of, I don’t always love getting caught up in this kind of conversation.

I’ll spare you that effort. And, we’ll soon go to the clear examples.

But you have to know that we have two types of voice in most languages.

The active voice is when you say who did it straight. You give the complete information and don’t omit anything.

And you say it in the natural order — who did it, what they did, and anything else that is relevant.

But the passive voice goes the other way.

Here are some sentences in the active voice in Portuguese.

Keep an eye on the tenses, too. They’ll be replicated in the passive sentences as well.

And here you find the very same sentences but in the passive voice.

You usually have to use the verb “ser” with the passive voice. And it is followed by the past participle of the main verb (the endings -ado, -ido).

And when you want to mention who did it, you must include the preposition “por”. 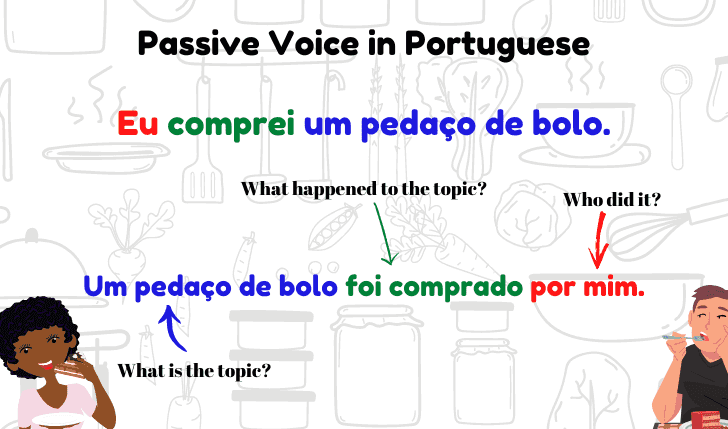 A common mistake is to use the prepositions “para” and “de”. Watch out for that one.

Of course, you can do as I did and leave the doer (“the agent”) out of the story.

O modelo vai ser construído. The model is going to be built.

I said above that you must use the verb “ser” with the passive voice in Portuguese.

But should you keep to that only one verb?

Depending on what you mean, using “ser” defeats the purpose of communication — it will sound odd and out of place.

But there is a slight difference in meaning.

When you use the verb “estar”, you’re talking about the result of an action, the now.

And It Only Gets Worse. But You Should Not Worry.

Depending on the verb used as an auxiliary, you have to choices for the participle.

But you won’t have to worry about that for most verbs.

The ones you should worry about, though are some of the most common verbs Brazilians use every day.

If you’re using “ter, haver” as an auxiliary, then you should pick the regular participle. This one usually ends in -ado or -ido.

If “ser, estar” are the auxiliary of choice, then you must choose the irregular participle.

In the table below I’ve included the most common verbs with both participles.

And for a more complete list, go here (entirely in Portuguese).

And in this second table, you’ll find those verbs that have only one you regular participle for both situations.

And a nifty way to use the passive without drawing attention to itself.

Strunk and White told us almost 70 years ago we should strive not to use the passive voice too much.

And lucky you, that’s also good for Portuguese.

And in Brazilian Portuguese, we found a nice way to use this form without making our texts — and our speech — repetitive and clumsy.

We use the particle “se” — not to confuse it with the conjunction se (if)!

When should you use this form of the passive voice?

Whenever you don’t really know who did it, or when the doer is irrelevant to the context, as in the sentences below.

And mind the agreement.

In general, if you have a plural object, then the verb goes to the plural as well.

And Here is How the Story Ended

I was crying when he showed up on the stairs.

He was laughing. My mom gave him a puzzled look.

“I ate it,” he said. His laughter receded into giggling.

My mother turned around, looked at me, and apologized with that motherese that mother shoes when talking to babies.

I didn’t forgive her on the spot. But later she bought me some pastel and everything was fine again.

Do you have any questions about the passive voice? And try and complete the exercises we have here.

And if you’re learning the passive voice, chances are you need some help with Ser and Estar in Portuguese.