The Indefinite Pronouns in Portuguese, a Crime, and a Challenge 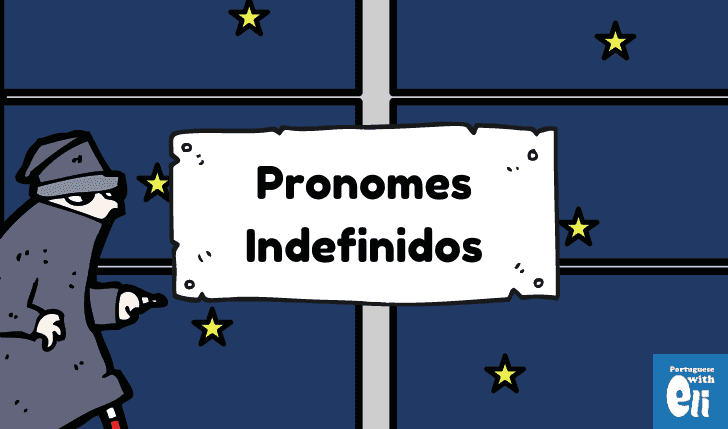 This is a big surprise nobody wants to have.

And as you’ll see, it has everything to do with the indefinite pronouns in Portuguese.

When I was a kid, I had one neighbor that nobody liked. Even his dog bit him when it had a chance (and it died shortly after).

But this neighbor had a surprise I’m not sure I would wish on him but I can’t say I was sorry.

He went with his family to the countryside. And in those trips, he would spend two or three days.

When he came back, he found someone had broken into his house and taken the TV away.

They didn’t want anything else. Only the TV.

This neighbor asked around. He wanted to know whether anybody had seen the burglar.

(In retrospect, I don’t think I would’ve told him had I seen anything.)

Okay, interesting story, you might say. But what does it have to do with the indefinite pronouns in Portuguese?

Well, I challenge you to retell this story in Portuguese in the comments section.

The goal here is not to show that you know or don’t know something — a pissing contest is really something this site isn’t about — but to draw your attention to how different our Portuguese system is from what you have in English.

For starters — indefinite pronouns that change

We can say that there are two big groups of this kind of pronoun: variables and nonvariable.

The variable ones change. They may be feminine, masculine, singular, and plural.

And that’s the group we are going to tackle here.

Say you go to a restaurant after the pandemic ends.

You might expect every single food joint in town to be crowded.

After all, nobody has to worry anymore.

So, at the entrance of a fancy restaurant you might ask:

And the receptionist would answer with a sad smile:

And as you could see, both the pronouns were used in the feminine form. If they were masculine, you would have algum and nenhum.

And let’s take a look at the plural for good measure.

But many people say that:

Do you agree with that?

And the following example is all about me when it comes to Russian:

The important thing to notice here is that in English you have two words whereas in Portuguese we need only one.

Imagine you’re about to finish a very important project.

You burned the midnight oil, the morning oil, and whatever oil that was left. But at last you finished.

A moment after you declare victory, your boss shows up and says there is still one more thing to finish.

If you were Brazilian and English weren’t your native language, you would probably say:

It might not sound wrong but it certainly wouldn’t be what you would say. You would probably say, “yet another!?”

And Brazilians would say “other!” because that’s how we would express it in Portuguese.

And now let’s take a look at the nonvariable pronouns

If you grew up hearing that double negatives are a bad thing, well, they aren’t. At least not in Portuguese.

So, whenever you are using an indefinite pronoun in Portuguese that has a negative sense, you must pair it up with something that expresses the negative (não, nunca etc.).

If you go to Colombia, you certainly need to speak Spanish.

But let’s say you just want to go there for two days and it’s a once done never again thing.

You call some friends because you want to learn just one or two words to get by. You ask:

An important thing if you’re a Spanish speaker

If you also speak Spanish in addition to English you probably feel tempted to say “nadie” when expressing “nobody”.

Don’t let that happen. In Portuguese, “nadie” sounds like a woman’s name, in addition to being quite close to the word for “nothing” (which you’re about to see).

Again, remember that double negatives are a thing in Portuguese.

The real Brazilian way to deny things in Portuguese.

Did you have a videogame console growing up?

I was lucky and privileged enough to have one (my dad defaulted on the payments and got a really bad reputation on the market, but that was okay to me).

I wanted to play video games all the time, but then my mom would go:

And you see that “alguma” was placed after the noun, not before. When it is used like this, it reinforces the negative sentence.

She could have said:

And that would be okay. But I wouldn’t probably obey.

The original sentence clearly conveys a threat that can’t be ignored.

And let’s take a look at some more examples.

And just a cultural thing — in Salvador (where live) when people say “it’s okay” they usually express it like this: “É nenhuma, brother.”

Why they say that beats me.

And here’s a table to make you happy:

Well, do you know one very common problem my students have that they want to solve?

Uses of the Portuguese verb tenses. It’s something that most of them have improved on by using this report.

And best of all is you can get it now free.

It is on sale on Amazon. And yes, there are people who prefer to pay for it.

But you don’t need to. Just download it to have a better Portuguese today.

And again, my challenge for you is still valid. If you want to take on your task, use the comments section.