Beyond Language, Into Culture: Yes and No in Portuguese 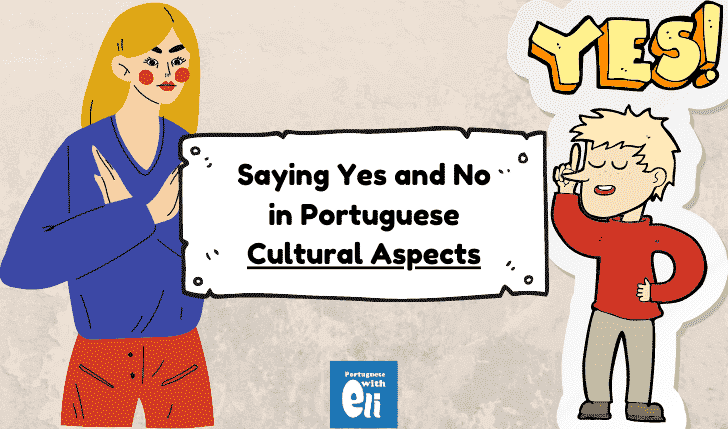 You’re a nice person overall, but you might be inadvertently rude to Brazilians.

It’s not your fault. It’s just something embedded in the culture.

It has to do with saying yes and no in Portuguese.

My hope is that they help you navigate your way with Brazilians when the time comes.

And She Went on

For a number of years, I had blue-collar jobs.

I loved the routine and the predictability of my work, but I simply hated having lunch.

It was the worst meal of the day. I had to lift grunting weights, carry boxes along, and move things around. And with a full stomach, that was horrible.

So, on that particular day, I didn’t want to eat shrimp Bobó at work.

If you don’t know what bobó is, just bear in mind it’s one of the most delicious dishes from Salvador. Looks like soup.

The server was Mrs. Ray (assumed name) — a lovely, nice lady who bore a striking resemblance to my mother.

“Really sure? It’s going away really fast, everybody’s eating it.”

And with a really quick move, she scooped some of bobó and put it onto my dish.

I had to eat that, even though I didn’t want it.

What happened with Mrs. Ray was simple — in Brazil, we don’t really understand when people say “não” the first time.

For us, it’s just as if you are timid and don’t want to bother other people.

Grammatically and socially, when you want to say “no”, never just say the word “não” in isolation.

It feels like a blow with a truncheon in our face.

The correct way to do that is as follows:

As you see, we always repeat the main verb after we say the first “não”.

If you answered only “não” to any of the questions above without adding the verb again, Brazilians would take that as a sign that you’re angry.

And How Does That Work When You Say Yes in Portuguese?

Although there is no rudeness involved, you should repeat the verb in the affirmative when you reply “sim” to a yes/no questions in Portuguese.

But we usually repeat the verb in the affirmative without using the word “sim”.

You go to a shop. It’s crowded. You try to draw one of the salesclerk’s attention. To show she is paying attention to what you’re saying, she’ll probably use this expression.

How to Actually Say No in Portuguese like a Brazilian

Let me give you another anecdote.

When I was in college, I loved talking with people from other countries.

I’d never really seen a foreigner at an arm’s reach.

So, when Julie (assumed name) came from Germany I scrambled to see her. Not only did we have a shared friend — I also wanted to practice my German with her a bit. And since she studied Latin American studies at college, I thought I might be of some help.

There were six of us talking with her. We were introducing interesting things we thought she might like.

While my friends entertained her, I bought a piece of the pie that I really liked. I thought she might like it too.

When I offered it to her (“você quer?”), she just said “não” and turned around to talk with other people.

Even though I know people in other cultures tend to be more straightforward, I’ve never gotten used to it.

I ate my pie alone and after that, I didn’t want to speak to her anymore.

It was my Michael Scott moment.

But if Julie were Brazilian, this is how she would probably have answered.

When saying yes and no in Portuguese, you have to remember we are never direct (unless angry, of course).

And if you want to refuse or just deny something in Portuguese, try to find roundabout ways of expressing that.

Avoid saying no as much as you can.

This is the best way for you to incorporate that Brazilian behavior that we all have.

Even If You’re Not a People Pleaser, Try Not to Be Too Direct in Portuguese.

Just because we don’t say no as much as other people from other cultures, it doesn’t mean you have to comply with anything Brazilians ask.

I’ve talked about it elsewhere, but repeating has never killed anybody.

And someone offers you a gooey piece of chocolate cake.

You first thank the person offering it and then say you don’t want it.

You say no but we understand “if you try once more, I might accept it.”

And we will act accordingly.

If you refuse something three times, it’s clear to us you don’t want it and we’ll leave you alone.

Another Episode to Illustrate the Point

You can do like one of my friends who came to visit us at my mother’s house.

If you don’t know, in Brazil we eat rice and beans every day.

And although many people are okay with rice, beans every day might be a bit too much.

And not being used to eat beans every blessed day, my friend got desperate when she saw she was going to have beans for the fifth day in a row.

It gave me a start, it shocked my mom. Seeing our puzzled expressions, my friend quickly added — it’s just that I’m going to work and don’t want to feel I’m too full.

If you came to visit my family, we would probably ask you:

Você quer comer alguma coisa? Do you want to eat something?

Most Brazilians equate offering food to caring about others.

When answering yes, we hardly ever just say “sim”.

You just conjugate the same verb the person used to ask a question.

If you say “sim” you should add the conjugated verb to soften your statement.

But if you wanted to refuse it, you could use one of the alternatives below:

Again, if you always said no as in the third alternative, you would come across as angry or rude.

We sometimes sandwich our answers with the word “yes” or “no” (as in the fourth example above). It emphasizes our answer.

And in some states — like in my home state — people will omit the first no and added to the end of the sentence no matter how long it is. 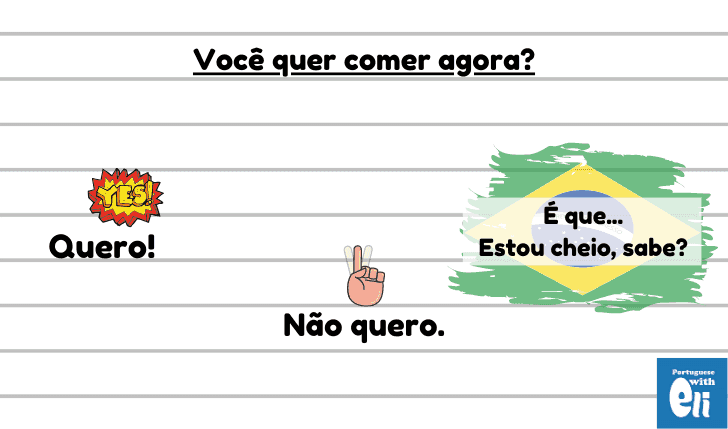 Sometimes, the lack of frankness in Brazil drives me crazy. But I can’t really say hate it.

It’s part of who we are as a people.

And, even though I believe we should be more straightforward, I see it can be rewarding sometimes.

I really enjoyed the bobó on that day.

And how about in your country — are people straightforward or indirect? Do you prefer the Brazilian style of saying no and yes? Let me know your thoughts in the comments section below.

And if you want to know more interesting characteristics of Brazilians and already read some Portuguese, you can check this excellent article by Deutsche Welle on typically Brazilian traits.