An Obscene Collection of Shoes, A Former First Lady, and Portuguese Stories 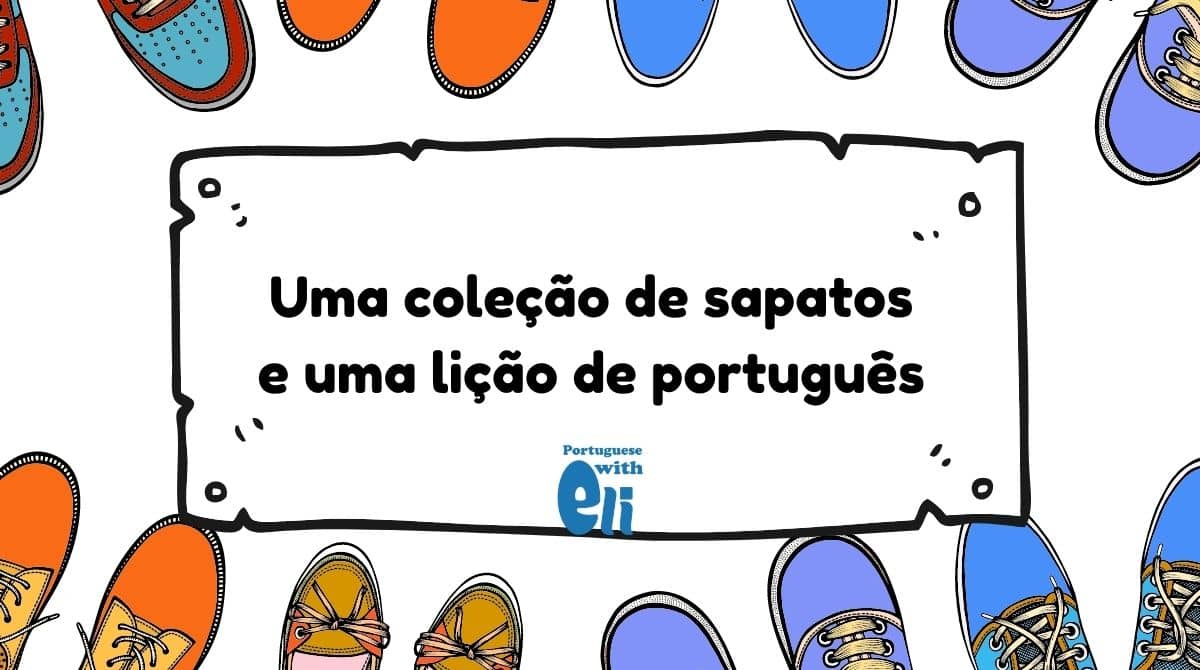 I love stories to learn Portuguese. And to teach, too.

I’m going to disclose what some of my methods of teaching are.

In my Portuguese lessons, I really like using associations.

And almost always, whenever I use them I end up learning more from my students that I expect to teach them.

The Seed of An Experiment

To a specific group of students, I showed the image of a shelf full of shoes and asked:

“What comes to your mind when you see this image?”

The first answer I got was from a student who said: Imelda Marcos.

The name didn’t ring a bell. My student and I talked a bit about her. I got to know the story of this “celebrity”.

It was very interesting. But I couldn’t really pay attention to what she was saying. I mean, I was paying attention to everything my student said, but the name Imelda Marcos didn’t stay with me.

I still had nine other classes to teach on that day.

But on another day something funny happened.

Out of curiosity, I showed the same image to another student: would he say the name of Imelda Marcos?

And say her name he did.

I must have looked at him quizzically. Two people had the same association with the same kind of image…

It couldn’t have been a coincidence.

Putting a Theory to Test

After that, I went on to prepare a specific lesson in which that same image was used.

And all my students living in the United States or coming therefrom replied with the same name: Imelda Marcos.

But Who was Imelda Marcos?

If you are from the United States, you probably know who she is.

And if you don’t, I will not Wikipedia you with a longish description.

Suffice it to say that Imelda Marcos had a long political career in the Philippines.

She’s a former first lady who held many important positions in the government of the Philippines. She was elected as a representative four times after 1990 — according to Wikipedia — and did many things.

But what made her famous was her luxurious lifestyle and her — and the adjective is mine — her obscene collection of shoes.

There are many articles detailing how she got to have that many pairs of shoes.

And she had about three thousand pairs of shoes.

And after the political turmoil settled, Imelda Marcos became a kind of attraction.

Up to this day, people are writing articles about her.

And, of course, about her extravagant shoe collection.

But why the heck am I talking about her right now?

That’s a good question, and it deserves an answer.

The Power of Using Stories to Learn Portuguese

In the head of my students, Imelda Marcos and her story was branded as it with fire.

And it is true even for those students who were too young to remember the story on TV.

And that’s the power of stories.

You might even think it a bit odd, what I’m about to say. But… Our brain is hardwired to feel pleasure through stories.

That’s the conclusion of the scientists of the University of California, Berkeley.

According to their research, our brain likes it when we watch, read, or listen to a good story.

That’s because it liberates oxytocin — a hormone associated with love.

And of course, you probably remember the face of the loved one in high definition detail.

And the same happens with facts that we learn about when our brain is flooded with that hormone.

Images stick, and words too.

And that’s exactly what you can do to learn and retain Portuguese vocabulary, words, and facts related to Brazil and the Portuguese language in general.

And, not wanting to toot my own horn (but who will?),  stories are what I offer in my newsletter — daily stories in Easy Portuguese™ to make you remember and always have something to talk about with friends. You can sign up right now right here.

And of course, I want to know from you: what’s the best or most memorable story you remember that you can tell in Portuguese?

Leave it in the comments section below. Thank you.