Finally, the Difference between Mudar and Trocar in Portuguese Explained in Simple English 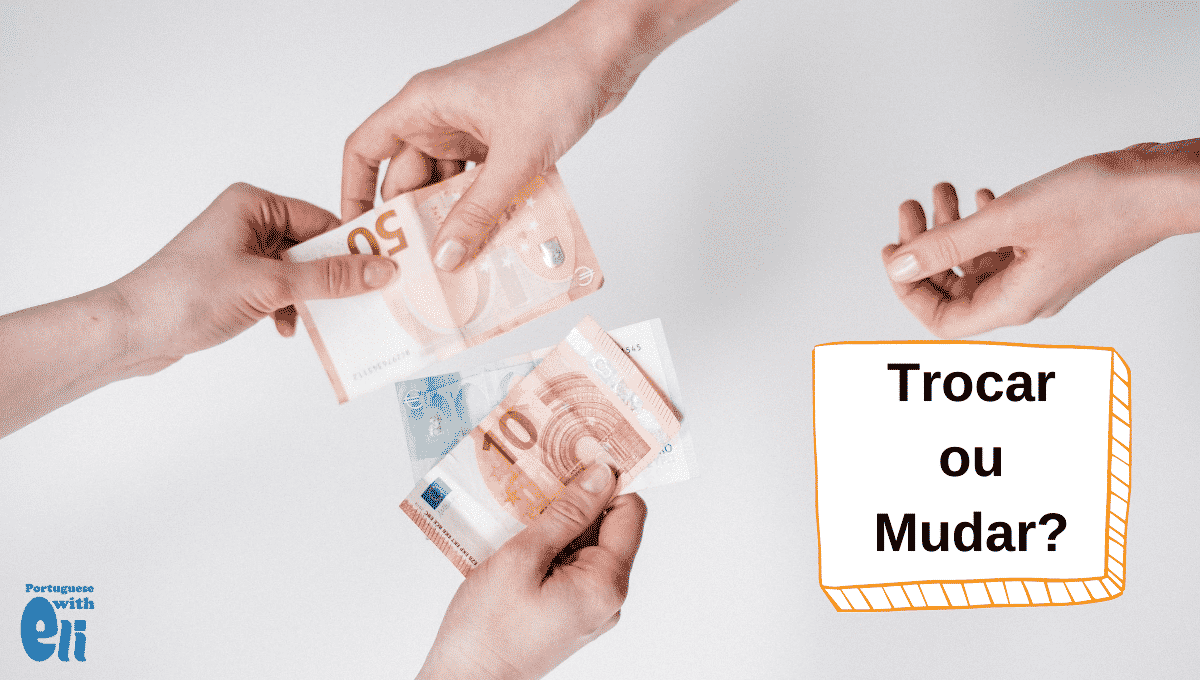 You’ve probably used those two verbs before but you’re not quite clear about the difference between mudar and trocar in Portuguese. And they are oh so important.

First, they are used in many colloquial expressions — and you want to use them to sound more natural.

Secondly, the contexts in which you can use them are similar, but they are not the same. One silly faux pas and you’ll sound odd to your friend’s ears.

Now, if you want to return a product for something else, would you use “mudar” or “trocar”?

By the end of this article, you’ll be able to use the right verb… And probably confirm your answer right now.

First off — Similarities between Mudar and Trocar

Let’s just get this out of our way.

Mudar and Trocar are similar. They share the meanings of “substitute, replace, change.” For example, if you want to say change clothes, you can use either “mudar” or “trocar” and no one would notice the difference.

Because it doesn’t exist.

But there are differences, and you’ll want to know them.

The Meaning of Mudar In Brazilian Portuguese

“Mudar” has several meanings. Let’s take a look at the most common of them.

Here, you’ll notice that I included “me” between parentheses because it’s optional.

You would usually need the preposition “de” for this sense. Although I’ve heard people saying it without the preposition — and that’s perfectly and grammatically legitimate — I don’t say it like that.

And here I’d like to include another note on usage.

If you want to sound like a Brazilian, you should know that verbs in Portuguese can be used in two ways: the way they show up in the dictionary or using the verb “dar” + uma +  original verb  + ada.

I know it looks like a math formula, but I can guarantee you that it’s simple.

Dar uma mudada em algo means to change something. And yes, it’s the same as “mudar algo”. The difference lies in the register. The single verb can be used in formal and informal situations. The verb phrase has a more colloquial tone to it. The same happens with other verbs:

Just one more thing: the verb phrase also sounds more immediate. You would use it to say, “I’m going to study Portuguese right now” but you wouldn’t probably say it if you meant “I study Portuguese in general”.

The Meaning of Trocar in Brazilian Portuguese

Like “mudar”, “trocar” also has several meanings. We’re going to take a look at each one of them separately.

You see here that “trocar” also means swap, exchange. If you sit down with friends to swap stories and drink some beers, this is the verb you want to use.

Confuse (names, what you want to say)

Eu queria ter dito que neste sábado não era possível trabalhar, mas acabei trocando as coisas e disse que só não trabalharia na próxima semana. Agora vou ter que ir para o casamento de minha amiga.  I wanted to have said that it wasn’t possible to work on this Saturday but I ended up confusing what I wanted to say and said that I wouldn’t work only next week. Now I have to go to my friend’s wedding.

Wrapping Up with Colloquial Expressions

Before we move on to some colloquial expressions with this verb, the answer to the question I asked you above is “trocar”.

This is the verb you use when you want to return a product for something else. You can use “mudar” if you want to change your mind while you’re buying something.

Now, off to the expressions:

This is one of my favorite expressions of the Portuguese language.

You use it when you want to make yourself clear or when you want to sum up what someone said, and usually you’re angry or dissatisfied at the fact that what that person said was so convoluted (just like me and my explanations).

Confuse (names, what you want to say, things): trocar as bolas

Here’s another expression I love. This is extremely informal and has an angry tone to it.

Literally, it means “to exchange six for a dozen”. As such, its meaning is quite clear. But it’s a colloquial expression anyway.

So, now that you know the meanings of mudar and trocar you can use them with confidence when you talk with friends.

And if you want to learn the difference between other common verbs in Portuguese, head over to our vocabulary section. There, you’ll find several articles that are added each week.

And if you have questions, send me a message 🙂 Most of the articles that are written here were inspired by my students’ questions.