5 Minutes: Master the Difference between Pedir and Perguntar in Portuguese 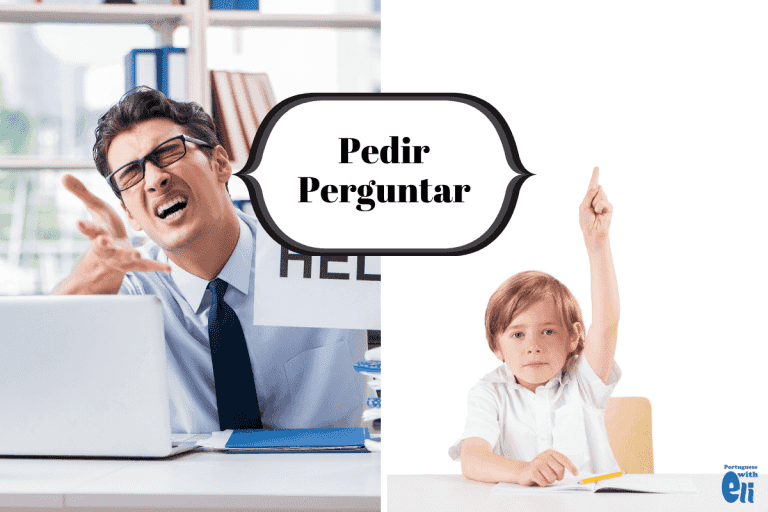 Melanie is a hypothetical student. She’s an accomplished student — an hour-long conversation about politics in Portuguese is a cinch. But even now, after one year of studying Portuguese, she still doesn’t know the difference between “perguntar” and “pedir” in Portuguese.

Actually, she does know. It’s like “ask a question” and “ask for something,” respectively. Sounds easy. But… hey. It’s not that easy.

Why? Simple. In our Brazilian minds, the concepts are stored in different compartments—two entirely separate sections. In English, it’s not the same.

Because you use the same verb — but with different prepositions — you’re prone to getting confused.

But it’s your lucky day. You’ll discover quickly how to understand it once for all.

And just in time — should you have any doubts about how to ask questions, you can check how to use the Portuguese question words here (new tab).

Our aforementioned friend, Melanie, might keep confusing those, but you don’t need to.

Simply because you know that the outcome of “pedir” is an action. And the result of “perguntar” is an answer.

You see I used “order” in my translation of pedir in the first example.

That’s because when you order, you’re asking for something. But you know that the object of your asking will be given. By the way, “pedido” is the correct word for “order” in a restaurant. You don’t want to say to the server that you want to “fazer a ordem.”

And the logical follow-up of the second example is a simple yes or no.

You can use pedir in different ways.

And depending on how you structure your sentence, you must either use the subjunctive or the personal infinitive.

I know, I know. It’s hard to say which one it is that you must use.

Well, let’s take the sentence “I ask him to write a report.”

You see here that “peço que” will always take the subjunctive.

Not hard at all. It’s just a matter of paying attention to which one you use.

Additionally, you’ll want to bear in mind that the personal infinitive structure’s rather flexible.

You might get fancy-pants and use the pronoun “lhe” (to him, to her, to you).

And when you use these “weak pronouns,” they’re placed after the verbs. But you don’t really want to use them in conversation. It’s not so common. People might think you’re somehow related to our former president Michel Temer, the “last” person in Brazil to use ultra-correct —hence stilted and stiff — Portuguese.

Perguntar — Not as Troubling

You can be good friends with Perguntar. When using this verb, all you need to remember is: you want an aswer, and the answer’s the direct result of your question.

By the way, you don’t want to use “questão” for “question.” It sounds official and inquisitive. If you say, “eu tenho uma questão,” that sounds like you have a problem. A common sentence we use in Brazil is “sobre essa questão” to say “as for this issue/problem.”

Pergunta is the word you want.

So, our friend Melanie discusses “as questões” of political science. She’s a wise woman. She’ll never trust anyone who uses “pergunta” in this situation.

And one or two more examples for the road:

Ask a question, as you can see, is “fazer uma pergunta.”

So, just to reinforce (it never hurt anyone):

The difference between pedir and perguntar in Portuguese is that Pedir needs an action as a response, and perguntar requires an answer.

“But an answer is also an action, isn’t it?”

Melanie, Melanie. I knew I could trust you to come up with these “will the sun be up tomorrow” questions.

Yeah, it’s an action, but it involves no movement, or physical activity, or change in state, on your interlocutor’s part.

Okay, if you want to know a bit more about the tenses you’ve read about here, I’ve prepared this exclusive 43-page guide with insights on the verb tenses in Portuguese and how to use them.

And if you have any more grammar questions, head over to our grammar section.